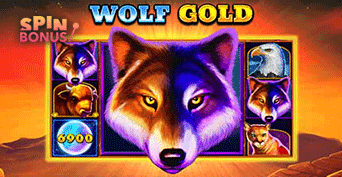 How to Play Wolf Gold Slot

Wolf Gold slot surprised everybody when it was launched. To the shock of many, it went on to pocket countless awards for its gameplay. The slot itself is based loosely on the great North American plains and its wilderness in particular. This slot features wolves, cougars, mustangs, buffalo and plenty of other imagery which is representative of that fact.

Pragmatic Play has put together a cheap and affordable slot. It is one which contains 3 fixed jackpot prizes, and these range from 750 coins up to 25,000 coins in value.

Considering that a bet on this 5-reel, 25-line slots costs just 25p a spin at its cheapest, and no more than £125 a turn at its costliest, few players will complain. The RTP (return to player) rate is above average, too, at 96%, making this a fair game. Given what you can bet in contrast to what you win, this is an exciting release. Is it worth of the accolades it has received, though?

It is the moon symbols which will give players their best chance of landing the jackpot prizes mentioned above. When at least 6 of these symbols appear anywhere on the reels (they can appear stacked), players will get to play with 3 free re-spins. The idea is to land as many Wolf symbols as they possibly can. The more they manage to bag, the larger the non-progressive jackpot they win will be worth.

Can I Get Free Spins on Wolf Gold?

As mentioned, there are scatter icons in this game. They appear as a canyon. These symbols can activate a free spin bonus should slot players land them on reels, 1, 3 and 5 in the Wolf Gold slot game. Once the free spin bonus begins, players will start with just a total of 5 games.

During those spins, the second, third and fourth reels will link up. This means that they will not only show the same symbol but display what is in effect a 3×3 colossal symbol. If that happens to be a wild, big wins are guaranteed. Players can also retrigger the bonus by landing more scatters on the reels.

Wolf Gold slot is a fair game, and perhaps that is why it has been so well received. However, there are plenty of other sides to the slot to like. The free spin bonus is just a touch more generous than you would find in rival, similarly-themed games, and the jackpot prizes are relatively easy to bag, even if they are non-progressive in nature. When players consider all of this, it seems entirely fair to call this one of the better slot releases from Pragmatic Play. As a testament of that, this game can be found in plenty of significant casinos out there across the net.