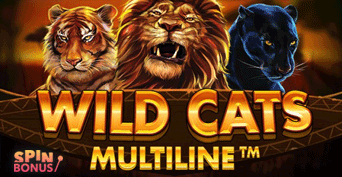 Most modern-day six-reel slots tend to be MegaWays releases. Although Red Tiger Gaming has produced a few such slots, Wild Cats Multiline is not one of them. Instead, this feline-themed slot is a standard video slot, albeit one with added reels to boost a player’s chances of landing a win. Like MegaWays slots, the number of paylines open to players changes each spin. However, those lines are capped at 49 in total in this release.

Wild Cats Multiline is surprisingly cheap to play, considering there are up to 49 lines available on each spin. At its most affordable, the slot will set players back around 10p a game. Video slot players who wish to push the boat out can wager up to 40.00 a turn on the Red Tiger Gaming developed slot. Prizes are fair, without being extravagant. Expect a non-progressive jackpot to reach no higher than 400x a bet in this release.

Let’s return to the paylines for a moment. On each spin in the game, a random number of paylines will be selected by the game. The number of winning lines is determined by the size of the symbols which appear on the reels. Anything from 4 up to 49 paylines can appear on a spin.

Most of the world’s biggest cats appear in this game, including tigers, jaguars and, of course, lions. The lion appears as the wild symbol in this cat-themed game, and it can replace all other standard paying icons. Wilds can also dish out cash prizes to players, which is not to be sniffed at.

Scatter icons will naturally trigger a free spin bonus, should they appear in number on the reels. Wild Cats Multiline players are required to bag at least three of them if they wish to trigger the said bonus feature in the slot. The more scatters a player manages to acquire in the base game, the higher the number of spins they will start with.

How to Get Wild Cats Slot Free Spins

Players should note that wild symbols frequently appear on the reels during the bonus round. Moreover, if one of them does appear, a paw may become outstretched across the reels and slash at symbols. A free re-spin can then see icons pop into place to replace those which have been clawed.

Often, the symbols which appear via this feature tend to be ones that fit snuggly into your winning combinations. It is possible for several re-spins to occur in succession without taking away from your free spin total. This free spins bonus is handy and can really make the difference in this release.

Wild Cats Multiline initially seems challenging and looks as though it is going to be rammed with special features, perhaps even overly complicated ones. That is not the case, though. Instead, the slot is easy to play, generous with its winnings, and suitable for players on all budgets. It could have done with one or two more perks or bonuses, but overall, this is a well-rounded release from Red Tiger Gaming.