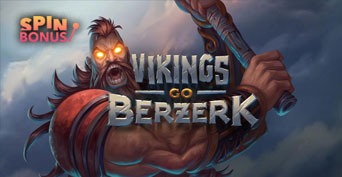 Vikings Go Berzerk slot is the second in a trilogy of Viking-themed 3D slots from Yggdrasil Gaming. Truth be told, most of the games in this franchise are strikingly like one another in terms of their storylines, imagery and the bonus features that they offer. However, since Vikings Go Wild and the later released, Vikings Go to Hell have both been so well received, why change the mode of gameplay?

This Viking-themed game sees the Vikings go battle against sirens (mermaids). Like the other slot games in the series, it is played over 5 reels and 25 lines, and as is the case in many Yggdrasil slots, those lines are not for altering. Players can, however, tinker with their total bets. At its cheapest, this game is going to cost 25p a spin. At its costliest, it can set you back up to £125 per game. Prizes are non-progressive in nature and respectable at 250x your bet, while the RTP (return to player) rate of 96.1% is average.

You can’t miss the wild symbols in Vikings go Berzerk slot, these appear golden shield-like emblems and can replace any others you may need to scrape together a win. The only symbols they cannot act in the stead of are free spin bonus symbols.

Golden chests can deliver multipliers worth up to 10,000x your line bet, trigger the free spin bonus, or add 25% to a Viking Rage meter.

That Viking Rage meter sits below each reel. When one of these meters is filled, players will get to play 7 free games with whatever Viking the meter indicates in “Berzerk Mode” – where they can easily defeat sirens and become wilds.

Ragnarök Free spins are triggered either via chests or by landing 3 or more free spin scatters on the reels. Players are rewarded with between 7 and 21 spins depending on how many they land. A single bonus is added to their reels during the feature. This bonus may include all Vikings going Berzerk, sticky wilds on random spots or reels, 1-3 additional free spins, or 5 treasure chests added to the reels.

Defeat the Siren’s for More Wilds

During the free spins, if a Viking defeats a siren, they will become wilds. This is made much easier if they are Berzerk. Vikings go battle with sirens whenever they appear on the reels, which happens rather frequently.

Most of the slots in the Vikings series from Yggdrasil have a similar type of battle feature, and in this one, it just happens to be sirens that they are facing. The special features in this (and the other) games need some getting used to and are incredibly challenging for newbies. Even so, once you’ve got to grips with them, the bonus rounds can offer plenty of goodies in this casino slot.