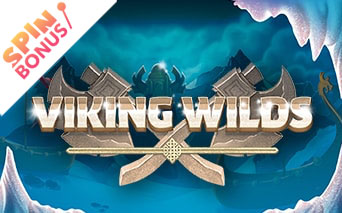 What is Viking Wilds Slot?

Players aren’t exactly short of options when it comes to Viking-themed slots of late. There are plenty of them out there to choose from. Iron Dog Studio’s take on the genre is arguably better-looking than many rivals’ entries, and it contains 3D graphics. However, the quality of the imagery isn’t the only reason why this slot stands out from the pack. It also dishes out an expanding reel structure as well as a tumbling reels gaming engine amongst other things.

What Are The Stakes & Ways to Win?

To begin with, Viking Wilds slot offers 1,024 paylines spanning 5 reels, and players will be able to stake bets which stem from 20p a game up to £50 a spin. However, once the tumbling reels come into play, as many as 3,125 paylines could potentially become accessible. No matter how many paylines players have active, prizes always remain capped at a non-progressive haul of 400x their stake. This slot is generally considered to be a high-variance slot, although one with an industry standard RTP (return to player) rate of around 96%.

Following any win on the reels, all winning icons are removed from the reels, with new ones dropping down to replace them. Provided players keep landing wins; this tumbling reels system will keep delivering opportunities for players to land wins. The more wins in succession a player lands, the greater the number of paylines they will get to play with, as the tumbling reels feature expands those reels and lines.

As the name of this slot implies, wilds are plentiful in the game. Standard wilds can substitute for all standard paying icons. Sticky wilds can only appear on the third reel and do not disappear when featuring in a tumbling win. Expanding wilds can appear on the second, third, fourth and fifth reels and can cover entire reels. Players can use those wilds to fill up key counters to the left of the reels. When all three keys are activated (by landing three wins using those wilds), a free spin bonus is offered to players.

Can I Get Free Spins on Viking Wilds Slot?

Yes! Players start the Viking Wilds slot  free spins bonus with 12 spins and a 1x multiplier. However, if players can snap up 14 spins with a 2x multiplier, 16 spins with a 3x multiplier or 18 spins with a 4x multiplier if they triggered the round with 1, 3 or 5 expanding reels active. It is possible for players to play with 3,125 lines in this slots bonus feature, with every reel which increases in size offering an expanding wild and an additional 1x multiplier to add to the tally.

Why Should I Play?

Viking Wilds slot was always going to find it tough to break out in the Viking-themed slot genre. The competition is fierce, and many Norse slots offer progressive jackpot prizes, a host of special features and cheap stakes, too. However, Iron Dog Studio’s effort should rank high amongst the best of them. NetEnt’s Vikings and Hall of Gods, as well as Yggdrasil’s Vikings Berzerk and its sister slots, are technically more prosperous and enjoyable, but this is by no means a lacklustre game in its own right.