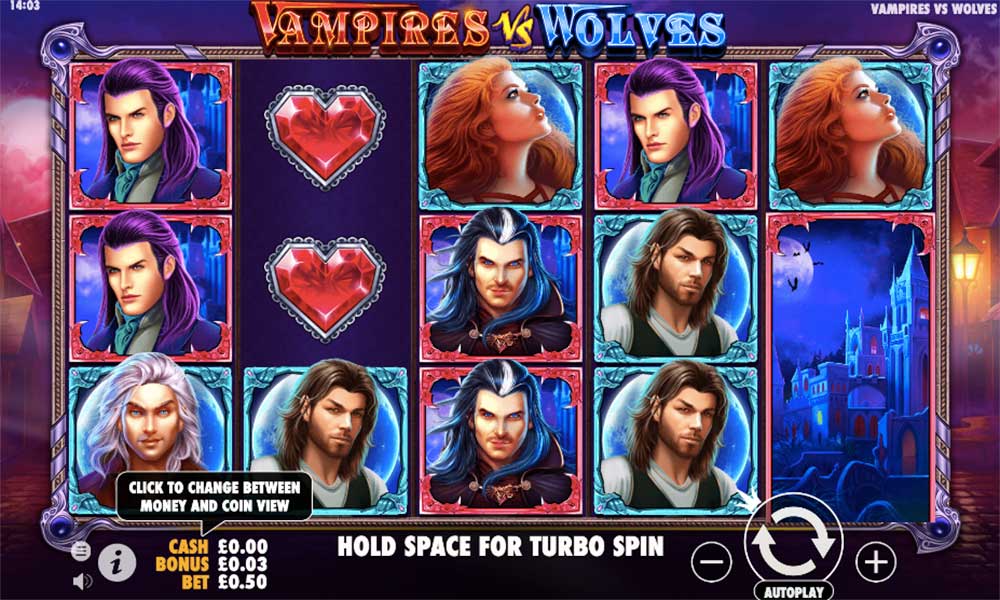 Vampires vs. Wolves slot by Pragmatic Play sees two of the spookiest characters go to head to head in this creepy, twilight-set game.

Vampires vs. Wolves features 10 pay lines upon its 5 reels, and these are fixed. Paylines are non-adjustable, but coin values are still highly flexible. As a result, you can expect to find wagers costing as little as 10p at the floor bet level. Ceiling bets are capped at £100 a turn. With a 100x a total bet non-progressive jackpot, there is plenty to play for. Vampires vs. Wolves also features a variable return to player rate, like so many casino slots launched of late. However, the difference between the lowest RTP and highest return to player rates are minimal.

Wild symbols are easy to spot in Vampires vs. Wolves. They appear as large, golden blocks. These symbols will naturally play a part in doling out wins in the game, and they do so by substituting for all icons, save for scatters.

Both vampires and wolves do show up as scatters, and they are often stacked symbols on the reels. They can only appear on the first and fifth reels, respectively. If they show up on both reels at once, a free spin bonus will kick into gear.

There are essentially two free spin bonuses, and it is entirely down to you which one of those they want to go with.

The wolf-inspired free spin bonus will dole out 14 free games. During that free spin bonus, the three wolf-themed human characters will become wilds, which should make winning a touch easier.

The vampire spins bonus offers up 8 free games. During each of those spins, the vampire-themed human characters become wilds. These symbols are sticky and will remain in place for the duration of the bonus round.

Why You Should Play Vampires Vs Wolves Slot

It’s all fangs and fur in this unique slot game from Pragmatic Play with two varied bonus games which will keep you on your toes.