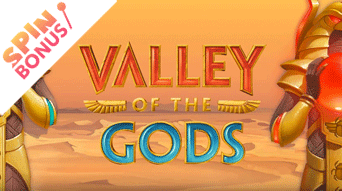 Launched in 2017, the Valley of Gods slot is a fantastical take on Ancient Egypt, and it features the quality 3D graphics players have come to expect from a Yggdrasil developed game. The Scandinavian casino software providers were always going to have their work cut out for them to produce something original with an overly crowded genre such as this, but there is no doubt that Valley of the Gods stands out from the pack.

For a kick-off, the Valley of the Gods slot features 3,125 paylines spread over its 5 reels. Of course, players were never going to be able to alter those lines, but they can still get away with dirt cheap bets in this game. Expect wagers to cost as little as 10p a game. Even at its costliest, this Yggdrasil slot won’t set slot players back more than £100 a turn. Prizes are non-progressive but reasonable at 500x a bet, and there is a more than generous RTP return to player rate of 96.2% worked in there, too.

Players will note straight away that there are no wild symbols or bonus icons present in this slot. Instead, the only special symbol of which to speak is a scarab, and it has a somewhat unique feature in this game. When a spin is made, twelve scarab symbols will appear on the outer positions of the reels. Following a win with 3 or more icons, that number of symbols will be subtracted from the total. Non-winning spins will replace all of them. The objective in the slot is to get rid of the scarab symbols to trigger a feature. In many ways, this method of delivering a bonus round is like the Alien Activity Meter found in the now-defunct Aliens slot by NetEnt.

Once all the scarabs have been cleared, the feature begins. Players will notice the red and blue statues (extra lives and multipliers, respectively) will fill up with gemstones. This means that players start with one extra life in the kitty, and a predetermined multiplier. However, as they spin the reels of this free spins feature, golden gems will add to the multiplier or life meters. Any non-winning spin will remove a life, and the bonus ends. The longer the winning streak you go on, the more likely you are to keep bagging extra lives to prolong the bonus. This is a unique and creative way to offer a free spin feature, and one many will enjoy.

Yggdrasil could easily have followed suit and produced the same tired, boring Ancient Egyptian slot you can find at any casino from any provider, but they didn’t. With the Valley of the Gods slot, they have aimed for something wholly new and exciting. The lack of other features may be a touch disappointing, but with so many ways to win, cheap bets and the original bonus round it does have, this slot is indeed worth a punt.