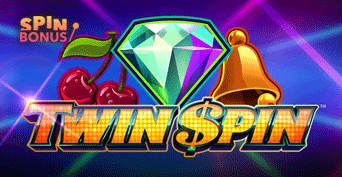 There are specific slots out there on the net which are just simply iconic. The ever-popular Twin Spin slot is one of them. It was one of the first slot games to fully realise the potential of linked reels and implement that into slot gameplay. Today, there are plenty of top slots out there which have pinched this feature, but most will agree that it really began with NetEnt’s Twin Spin.

Twin Spin slot doesn’t opt for overly flashy graphics and images. Instead, the game uses barebones diamonds, sevens, bells and high playing card icons as its imagery. These are all familiar to players who are used to simple slot gaming, and that is most certainly what you get with Twin Spin to a degree.

What are Stakes & Ways to Win?

The slot does, however, feature a 243 ways to win pay line structure, and costs as little as 25p a spin to play. At the opposite end of Twin Spin’s wagering range is a maximum stake which is capped at £125. Prizes are non-progressive in Twin Spin, but players can expect decent returns of up to 1,000x their bet with this release and its 96.6% RTP rate.

What are Twin Spin Wilds?

Wild symbols are present in the Twin Spin slot, they can appear stacked on the reels and can substitute for all other symbols in the game, as there are no scatter icons to get to grips with. Wilds can only replace other icons, though, as they do not offer cash prizes on their own. Instead, the best-paying symbols in Twin Spin happen to be the diamond, which is worth up to 1,000 coins when five appear on a line.

What are the Pay lines?

Speaking of pay lines, they don’t really exist as such in this NetEnt slot. The way that the 243-line system works is that it ensures that players only need to land matching symbols on adjacent reels to win. As long as the same icons appear on the first, second and third reel (or more) players are guaranteed a prize.

What are Twin Spin Bonus Features?

This slot takes its name from the linked reels feature it has to offer. This occurs in lieu of any real bonus round. On every single spin in the game, at least two of the reels will join together to display the same symbols. However, it is entirely possible that up to five reels can merge, cloning the symbols on one of the reels onto the others. It could be any set of reels that happens to be a part of this feature, be they the first two, the last two, the middle ones, or all of them at once.

Ideally, players are going to be looking for diamonds to appear across the screen on all of the slot’s reels to win the top prize in the game. The same effect occurs if four reels are linked with wilds, and the first or last reels happen to feature stacked diamond symbols.

Why Should I Play Twin Spin Slot

The wins on the Twin Spin slot game can be epic, but that is all down to how much you have wagered, and how many reels you manage to link together. Despite being a relatively elementary slot in terms of the features it offers, Twin Spin continues to be one of the most played and loved of all NetEnt’s online slots.