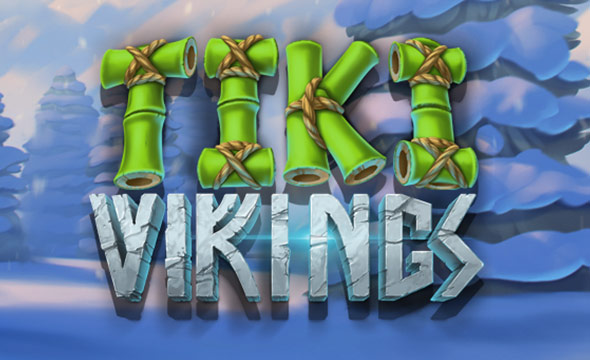 Tiki Vikings slot is arguably one of the most creative and inventive online slots developed by Microgaming and themed upon a fun-filled adventure to Hawaii with the Vikings!

This slot game debuted in late in the summer of 2019, and is fully mobile-friendly.

The game contains 20 pay lines which span its 5 reels, and you can expect to find fair and reasonable wagers. A floor bet of 10p is present, so you’re already getting a two-for-one deal on pay lines. At the upper end of the wagering spectrum, stakes are met with a ceiling bet of £250 a spin.

You could walk away with a non-progressive jackpot worth 300x your bet in this game. That prize is only paid out if five of the logos appears on any pay line.

What is The Symbol Lock Respin Feature?

There is a Symbol Lock feature in the game. This is a re-spin bonus which is triggered whenever three Viking or Tiki Vikings icons appear in a winning combo. It will lock those symbols into place, while all other positions on the reels will re-spin. If further symbols can be added to the combination, then further re-spins are offered, until no new symbols appear in the win.

What is The Symbol Upgrade Feature?

Also included in this slot game is a symbol upgrade feature. Once you trigger the Symbol Lock round, it will start to fill up. The two columns are displayed to the left and right of the main reel set. Once they are filled, the feature will upgrade any symbols which appear in the Symbol Lock round to the next highest paying icon. This ramps up your chances of walking away with a considerable winning combo.

Why You Should Play Tiki Vikings Slot

Tiki Vikings is not something wholly different in terms of theme, but it offers clever features and a relatively low volatility level.