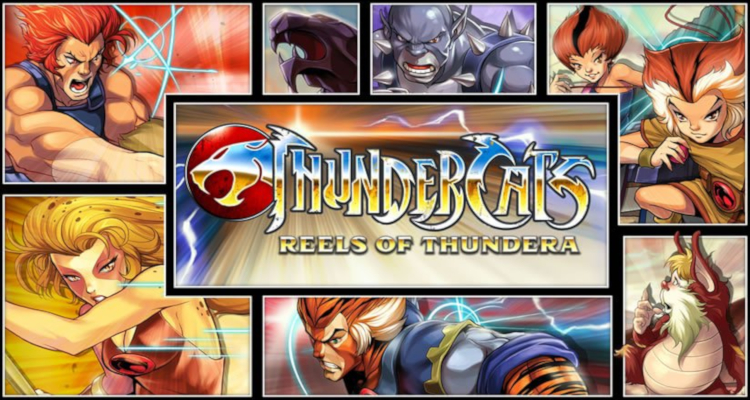 Thundercats: Reels of Thundera slot is the second online casino slots game to be developed by Blueprint Gaming to feature at spin bonus.

This Thundercats slot sequel is a 5-reel, 20-line release from Blueprint, which can be played for as little as 10p a turn.

Stakes rise no higher than £200 a game, and prizes are capped at five-hundred times whatever is wagered.

Wild symbols can substitute for any and all icons barring the Thundercats logo. The latter acts as a scatter. Those scatters can trigger a wheel-based bonus which will initiate one of six possible bonus rounds.

About the Reel Modifiers

At any point in the game, one of six randomly triggered bonuses may occur. Lion-O, Tygra, Panthro, Cheetara, Wily Kit & Kat, as well as Snarf all have their own modifiers attributed to them. These include added wilds, wild reels, linked reels with matching icons, a symbol shuffle (which offers five chances to land a win), mystery symbols, and additional bonus icons which may help in triggering a feature.

What is the Random Spin Features?

Following any non-winning spin, another one of four randomly triggered bonuses may (but it is not guaranteed) become active. These can see a guaranteed five-of-a-kind win occur, symbol upgrades, or the triggering of two types of collapsing symbol features.

Are There Any Bonus Features?

A wheel bonus determines which of the slot’s six special features you can access. The Sight Beyond Sight round offers you the choice of one of several features. The Black Pyramid bonus involves a trail-based game with instant cash prizes up for grabs. Meanwhile, the Ever-Living Bonus offers free spins with increasing wild multipliers.

The fourth bonus is the Hear The Roar Free Spins feature, which promises spins with symbol upgrades. The Thundercats Hooo! Free Spins round also promises free games, but with locked wilds. Lastly, the Ancient Spirits of Evil feature offers several wheel-based rounds, where you could win an epic Ultimate Thunder bonus prize which could equate to the non-progressive jackpot or a mega-money multiplier.

Why You Should Play Thundercats: Reels Of Thundera Slot