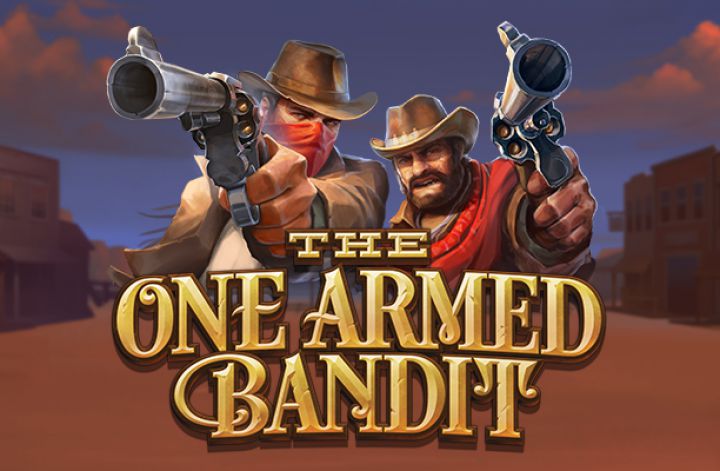 This online slot is played over a generic 20-line gaming structure, with those 20 lines spanning 5 reels.

This Yggdrasil Gaming produced slot has a return to player rate of 96.3% and a non-progressive jackpot which can dole out wins worth up to 80x your line bet.

With a two-for-one deal, you can enjoy all those paylines for as little as 10p a turn in The One-Armed Bandit slot. Maximum bets are capped at £40 a game.

The sheriff’s badge wild icon can only appear in the base game’s re-spin bonus round and the free spin feature. Should it appear in a winning combo in either of those two rounds, it will boost your wins by 5x. However, this icon is not available in the standard base game.

Whenever a scatter icon appears on the reels in the base game, it will trigger a re-spin. During that re-spin, the scatter will become a temporary wild, in the form of a sheriff’s badge. Additional scatters will keep the re-spin round going, with scatters filling up the spots above the reels. This may trigger the free spin bonus.

Scatter symbols pop up as the bandit. Should this masked fugitive appear once on each reel, he will activate the slot’s free spin bonus. That feature can also be triggered by landing the same symbol above the reels during the base game’s re-spin bonus.

You will start the bonus feature with a total of 10 free spins and a 5x multiplier will be applied to all wins which feature wild symbols. At the same time, any further scatters you locate on the reels will deliver an additional free spin. You can also use scatters to add another 5x multiplier, or even a 10x multiplier if enough of them are located on the reels during the feature.

Why You Should Play The One Armed Bandit Slot

Wild West-themed slot games were popular in the early part of 2019 and The One-Armed Bandit was one such game, debuting from Yggdrasil in the summer. Its unusual way of triggering the free spin bonus and the lack of any wilds in the base game make the slot stand out from the pack.