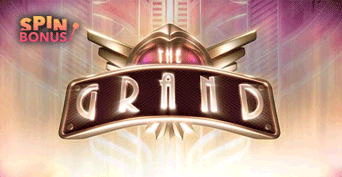 How To Play The Grand Slot

The Grand slot is one of several art-deco style online slots doing the rounds on the net. However, despite its stylish design, the imagery which appears on the reels of this Quickspin developed slot is a little basic and consists primarily of playing card suits as well as precious gemstones. The usual orange coloured wagering menu spans the bottom of the six reels, which offer 3, 3, 4, 4, 5 and a final 5 symbols, respectively.

Players will note that upon the unusual number of 6 reels that The Grand slot has to offer, there are 214 paylines. However, wagers are set to be cheap if you need them to be, costing as little as 10p a game. At the other end of the wagering range, bets can cost up to £100 a spin. Those cheap bets come at a price, though – the non-progressive jackpot is woefully short of most players’ expectations, at just 8x a bet in this game, which features an RTP (return to player) rate of 96.58%.

The stylish wild symbol doesn’t do much more than you would typically expect. This rectangular icon can substitute for all symbols barring free spin symbols, but that’s about it. However, a few base game modifiers have been included in the slot.

At any point in the base game, one of three modifiers may be randomly triggered. The first of these is the Sync Bonus, and it can ensure that all six reels expand to offer the same number of symbols. The second is known as the Wild Bonus, and it offers up to 8 random wilds on the reels. The final modifier is the Nudge Bonus, and it can nudge up to three reels (either up or down) to provide players with an added chance of landing a win.
Should 3, 4, 5 or 6 of the starry free spin scatters appear on the reels, a free spins round will be triggered. No scattered cash prizes are afforded to players in this round, so the symbols act solely as bonus triggering icons.

Can I Get Free Spins & Bonuses?

Yes, once The Grand slot free spins bonus round has been triggered, players will start with 6, 9, 12 or 15 spins, depending on whether they have landed 3, 4, 5 or 6 bonus symbols. In the feature, a Grandomizer Bonus can offer extra spins, or any of the three base game modifiers, which will remain in place for the duration of the round. The Grandomizer is triggered when three bonus symbols appear on reels 3, 4 and 5 during the feature.

The Grand slot is a fun game to play, even if the prizes are undoubtedly lacklustre. Triggering any of the base game modifiers usually results in a win, and naturally, during the free game bonus, the odds of success are heightened. This is a game that could have done with better-looking symbols on its reels, and more valuable prizes, but few players will grumble at the overall experience they can have with the slot’s features when playing this game.