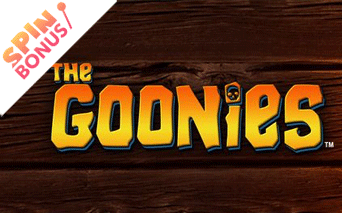 Blueprint Gaming’s The Goonies slot should need no introduction. This game is, of course, based on the cult classic 1985 film of the same name. The Goonies was one of the first movie-themed releases produced by this developer, and they have gone on to do others since testing the waters with The Goonies. Any fan of the film who likes a punt on slot games will undoubtedly love what they get with this game.

The Goonies initially appears like any other basic, run-of-the-mill slot. However, once you start spinning the 5 reels in this 20-line slot and begin to trigger the bonus rounds, you will rapidly find that it is a quite an original game jam-packed with plenty of features. Given the surplus of bonus rounds the game has to offer, a non-progressive jackpot worth 500x a bet, and a decent return to player rate of 96% few players are going to grumble at the wagering range in this game, which is set from 10p up to £200 a spin.

Wild symbols are likely to be the first special icon you come across. These silver coins can substitute for any other icons barring bonus/scatter symbols. Wilds are also the joint best-paying icons in the slot, alongside super-stacked pirate flags. Each can deliver wins worth up to 500x your bet when five appear in winning combos.

On any spin, there are six randomly triggered base game modifiers that players could prosper from. The Truffle Shuffle and One-Eyed Willy’s Bonus Boost features offer extra wilds and scatters to the reels, respectively. Mikey’s Hidden Riches turns entire reels wild, while Data’s Colossal Symbols can turn three reels into one colossal icon. Mouthy’s Lucky Coins bonus sees golden coins dashed across the reels. Any symbols with coins on them will then turn into the same icon. Lastly, Sloth’s Win Spin offers a re-spin which guarantees a significant cash prize.

Landing three or more One-Eyed Willy scatters anywhere on the screen will trigger a wheel bonus. After spinning the ship’s wheel, one of six bonus rounds will be dished out to players.

The first of the six bonus rounds which can be triggered via the One-Eyed Willy wheel feature is the Fratelli Hideout bonus. It allows players to pick a key to win cash prizes or other bonuses. The Skeleton Organ round will enable players to select keys to earn multipliers, symbol upgrades or another bonus.

In the Super Sloth bonus, players can win free spins on Fratelli-themed reels. All Fratelli icons become better-paying symbols if the ‘Super Sloth Wild’ lands on the reels. Players may also win further spins, end the bonus or trigger One-Eyed Willy’s Treasure bonus round after the round ends.

Lastly, the One-Eyed Willy’s Treasure bonus round can be activated via the free spin routes we’ve mentioned, or it can be won by landing five scatters. It allows players to land cash prize multipliers until booby traps terminate the feature.

On the basis of its theme alone, The Goonies slot was always going to be a legendary and popular slot. However, the inclusion of so many amazing features elevates it beyond everyone’s expectations. This slot is definitely worth a look, even if you don’t like the film it is based on.