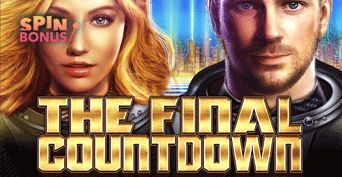 Big Time Gaming (BTG) has already proven that it has a knack for developing music-themed slots. They are the developers behind the Danger: High Voltage slot, and its sequel. Now, the casino software providers are having another crack at the genre, this time with Europe, one of the biggest most prominent Scandinavian bands of the 80s fully onboard. Their hit song The Final Countdown is the inspiration behind this release, which features Big Time Gaming’s much-in-demand MegaWays payline structure.

What Games Cost & Ways to Win

Launched in March 2019, The Final Countdown is played over 6 reels. The MegaWays payline structure means that a truly epic number of paylines can appear on each spin. In all, as many as 4,096 paylines are there for the taking. Arguably more impressively, bets on The Final Countdown are not costly, either. A minimum bet on this release can set you back as little as 20p a game, while even maximum bets seldom reach beyond £20 a turn. For their efforts, The Final Countdown is promising players the chance to win as much as 750x their total bet.

The Final Countdown players may wish to keep an eye out for the blonde woman. She appears as a wild in The Final Countdown. These symbols can replace any standard paying icons. The slot also comes with a handful of base game modifiers which can make quite an impact, too.

At any point in a base game spin, the reels may decide to clone themselves. This can naturally see identical symbols appearing on any of the second to fifth reels. Players will note that wilds can also appear on cloned reels, and they can expand, too. Colossal wilds appearing on cloned reels can range from 2×2 up to 4×4 in size. Moreover, these wilds also dish out tasty multipliers ranging from 4x up to 256x the standard rate of pay in The Final Countdown.

Can I Get Free Spins?

Yes, three or more scatter symbols appearing will trigger one of the feature bonuses, during which players have to select one of the two available free spins rounds.

The first of these is the Countdown bonus. It offers 8 free spins with 2×2 roaming wilds. Scatters can add additional spins to your tally, and every time the bonus is retriggered, colossal wilds with multipliers will expand.

The second feature is the Heading for Venus bonus. It provides 15 free games with cloned reels playing a major part on each spin. In this round, Velocity Wilds can boost your wins by up to 888x the standard rate of pay.

Players who like rock music, a great musical theme, plenty of wilds, and mad money multipliers will appreciate what The Final Countdown has to offer. As if that wasn’t enough, the inclusion of cloning reels and several other types of wilds is undoubtedly going to make this release stand out. You may or may not like Europe, but this music-inspired slot is certainly one of the most likeable around, of that, there is no doubt.