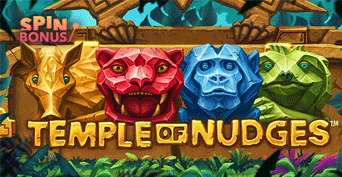 About Temple of Nudges Slot

The somewhat flashy Temple of Nudges slot has been produced by NetEnt and represents something of a fantasy-themed release. Various carvings of animals appear on the reels of the game, with the theme not tied to any known civilisation. Temple of Nudges gets its name from the nudge feature which is dominant in later stages of this colourful, fun and mobile-friendly slot machine.

What Are The Stakes & Pay lines?

Temple of Nudges features 243 ways to win payline structure, and there are decent enough bets to be had here. Of course, none of those 243 lines are going to be alterable, but bets nonetheless are. They can range from a low-rollers delight of 25p a spin, up to a big spender’s cap of £250 a game.

What is The Return to Player Rate & Prizes?

Temple of Nudges is not perfect, though. The non-progressive jackpot prizes are pithily and seem to be capped at only 9x a total bet. On the upside, this is a very low-variance game, with a standard RTP (return to player) rate of 96.03%.

What Are Symbols & Special Features?

Another notable absentee from the Temple of Nudges slot is the wild symbol. Although no substitute symbol has been including in the Scandinavian casino software provider’s release, there is a re-spin bonus. There is also a nudge feature that gives the slot its title.

How to Activate The Nudge Feature

How To Get The RE-Spin Bonus Features

Should players see re-spin icons appearing on the reels during the said feature, winning symbols lock into place on the reels, and all the remaining reel spots re-spin. This could potentially put players in a better position to add to their winning combo. Landing these symbols on the reels offers the resulting re-spin, and the re-spin itself does not count as a nudge, so you essentially get two attempts at adding to their winning line when this feature is triggered.

Temple of Nudges is highly likely to split the crowd. There are some lovers of classic slots who will very much appreciate the old nudge feature being worked into the design of a modern video slot. There is also likely to be players who are less than impressed with the lack of modern bonus features and the inclusion of poor-paying jackpot prizes. The slot is worth a look, but players should bear in mind that this video slot certainly won’t appeal to everyone in the online casino world.