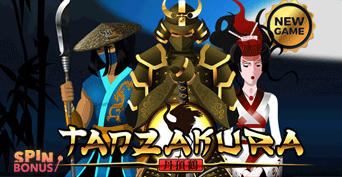 How To Play Tanzakura Slot

Saucify’s Tanzakura slot is an Asian-themed slot and one which works in many different aspects of historical Asian culture as symbols on its reels. For instance, the slot features warriors, leaves, snowflakes, cherry blossoms and flowers, weaponry and more, all set amongst a beautiful backdrop that resembles Mount Fuji. Being a decorative slot is one thing, but the gameplay and special features are more critical, and that is where Tanzakura may have issues.

What are the Pay lines & Stakes?

On the upside, the Saucify developed slot is a very flexible one in terms of Stakes. There are 50 paylines in the video slot, and all can be adjusted as you see fit. So, too, can the coin values. These stretch from 1p up to 25p, and it’s possible to wager anything from 1 to 5 coins per line. Ultimately, you’re going to see stakes rising from a base minimum of 1p per line and per spin, up to a maximum wager of £62.50 a game. The wild symbol is the most prosperous icon to land in this game, being worth up to 1,000 coins if five should appear on a line.

As well as doling out decent wins, those wilds can, of course, substitute for any other icons in the game, save for scatters. They also serve a third purpose – they can double the value of your wins. Known as the Maiden, these symbols appear on all five of the slot’s reels. However, only on the third, will they expand to cover the entire reel.

A few of the other character icons can also appear expanded (three symbols deep) on the reels of the game. The samurai can do so on reels 1 and 2, and Kubukimono can do the same on the fourth and fifth reels. Single versions of these symbols appear on the other reels in the slot.

What is the Scatters Feature

Two types of scatters can show up in Tanzakura. If three or more “feature scatters” appear on the reels, these will trigger an instant win game. In that bonus, players can select 1 of 3, 2 of 4, or 3 of 5 prizes that appear on the screen. All those prizes are, of course, proportional to whatever you have wagered.

Can I Get Free Spins on Tanzakura?

The second type of scatter symbol is the temple, and it is used to trigger a free game bonus in the Saucify developed video slot. Players are going to need at least three temple scatters to activate the free spin round. Landing three will offer 10 free spins. However, players can start the bonus feature with 14 or even 20 free spins if they acquire 4 or 5 scatters in the base game. There is nothing impressive or out of the ordinary with the free game feature. Free gameplay is the only perk here.

There are some nice features in this release, and the stacked/expanding icons do make winning a touch easier. As good as the gameplay is, it is still weak compared to that found in other slots. The Tanzakura slot is a bit of a hit and miss release, then, depending on your preferences.