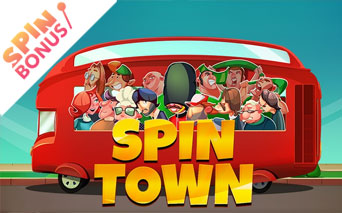 What is Spin Town Slot?

If Red Tiger Gaming had some sort of idea what the theme of Spin Town slot was supposed to be, they don’t seem to be sharing it with players. As best as anyone can tell, this slot is loosely based on jaywalkers and pedestrians, though don’t take our word on that. There are also football hooligans, Beatles lookalikes, and other UK characters present on the reels, which implies that there is a hint of Britain worked into the theme, too.

The Spin Town slot theme may be all over the shop, but the gameplay isn’t. In fact, there are more than a few decent ways for players to pocket wins in this game, which we will come to in due course.

What Are The Ways To Win & Return To Player Rate?

Spin Town is a 5-reel, 40-line slot game, and it will be appealing to players operating on a budget on account of it being cheap. Wagers cost just 20p a spin at their most affordable, and no more than £200 a game at their costliest. The RTP rate in Spin Town is 96.1%, and there are progressive jackpots to win, too. They are paid out when three jackpot icons appear on the reels. These can consist of the Must Drop and Mega Drop prizes, as well as a Daily Drop jackpot prize, which must be won before the timer attached to it expires.

Can I Get Spin Town Free Spins & Bonus Rounds?

Yes, Plenty of slot bonuses show up in Spin Town. Landing three vinyl records will see a Rock ‘N’ Roll shuffle bonus begin. Here, the Beatles characters walk across the reels and offer multipliers worth up to 10x the standard rate. The Guardsmen’s March bonus is triggered by landing three guards on the reels. It offers stacked wilds from both directions.

The Hooligan Advance bonus is the last of these features and is triggered when three footballs land on the reels. It can see a group of hooligans march across the reels, dishing out further cash prizes to players as they go.

Red Tiger Gaming certainly likes to include special features in their games, even if they are not particularly known for dishing out free spins. The software providers have done it again with this release. Spin Town slot is jam-packed with features, lots of different ways to win and a progressive jackpot to boot. The theme in Spin Town slot game may not be everybody’s cup of tea, but nobody could accuse Red Tiger of being unoriginal.