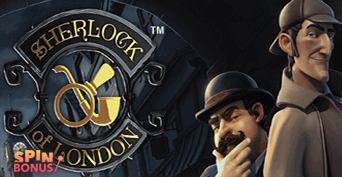 No prizes are paid out for guessing the theme of this release. Launched in the summer of 2019, the Arthur Conan Doyle-inspired casino slot is, of course, themed on Sherlock Holmes, as its title suggests. Developed by Rabcat Gaming and distributed by Microgaming on their Quickfire platform, the slot features the high-quality 3D and animated graphics we have come to know and love from this provider. Rabcat’s way of delivering zany special features are also well-represented in this 3D video slot.

To begin with, players will find 5 reels and 25 lines in the base game. Those paylines are fixed, but bets in the Sherlock of London slot are adjustable. These can cost anything from as little 25p a turn, up to no more than £50 a game. Prizes are decent without being extravagant in this medium to highly volatile slot and are set to 200x a bet. The best-paying icons in the game happen to be the iconic 221B Baker Street signpost, and the famous detective himself.

If more than one wild emblem appears on the reels, they will link up, and the symbols between them will turn into wilds. If two wild icons land next to each other on two separate reels, any wins in which they feature will be doubled. Lastly, if a wild lands on the first or second reel, those wilds will become sticky. A resulting re-spin (or even two) is offered to players, during which the other two features can also come into play.

A free spin round is also prevalent in this game. It can be triggered when players land three or more of the scatter icons on the reels. They appear as Holmes and Watson together.

How To Get Sherlock of London Free Spins & Bonus Features

Once the free spin bonus begins, players are awarded a total of 10 free spins. Wild symbols are not going to perform the same re-spin tricks here as they do in the base game. Instead, wilds in the free spins bonus can expand to cover entire reels. The connecting/trail wild and 2x multiplier wild features are in play, though. Players should also keep their eyes skinned for Dr Watson. He comes a secondary wild in the round. He will not come with perks and privileges like his more senior counterpart, though. The bonus can be retriggered, but only once. This effectively means that no more than twenty free spins can be played in succession.

Sherlock of London is a decent entry into the often-overcrowded Sherlock Holmes-themed slot genre. Rabcat’s beautiful looking imagery is matched by nifty features, cheap stakes, and decent returns. A well-rounded release, there are few players who aren’t going to find something to their liking when playing the Sherlock of London slot.