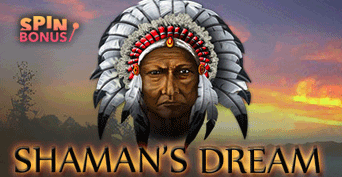 How To Play Shaman’s Dream Slot

Shaman’s Dream slot made its debut in 2015 and is one of many Eyecon developed slots that can be found in top UK slots sites. The premise behind this video slot’s theme is one of Native American culture. There are totems, tomahawks, tepees, dreamcatchers, eagles, wolves, arrows and princesses aplenty on the reels, all of which can dish out decent wins to players.

There is more to Shaman’s Dream slot than decent graphics, though. The slot also comes with 25 fixed pay lines and cheap stakes. Players who like flexible but affordable bets will be impressed with the wagering range in this release. Stakes cost as little as 25p a spin, and no more than £50 a game.

The non-progressive jackpot is also impressive, being capped at 9,500 coins in total. This game is a medium variance slot, with a satisfactory return to player rate of 95.4%, which is around about the industry standard.

The gorgeous white wolves aren’t just impressive to look at. These symbols also serve a special purpose. As wild icons they can substitute for any others a player needs to bag a win, save for scatters.

These will also double the value of any winning combos a player lands when playing Shaman’s Dream slot. Wilds can also distribute the slot’s non-progressive jackpot, which as mentioned earlier, is capped at 9,500 coins. These symbols even pay out a prize if just two appear on the reels, with 10 coins paid out should that occur.

The scatters mentioned a moment ago appear as dreamcatchers. They can trigger a free spin bonus should three or more show up anywhere on the screen during a base game spin. As well as that, they will also dish out cash prizes worth anything from 2 coins up to 450 coins in all.

A gamble feature has been incorporated into this slot for players who want it. Following any win, players can choose to trigger the round, which offers a simple 50/50 game of chance which can see players either lose or double their winnings.

Can I Get Free Spins on Shamans Dream?

Now, back to the free spins bonus round. Following three or more scatters appearing on the screen, players will be rewarded with a handful of free spins. It doesn’t matter how many scatter icons appear; players will always start with 15 free games.

During those spins, anything a player wins will be tripled. There are no other special features in this bonus round, although it can be retriggered should players land an additional three or more scatters on the reels.

Shaman’s Dream slot is a treat to play, both visually and from a gameplay perspective. While its special feature and pay line structures are bare bones, the game does dish out tasty wins somewhat frequently. It also costs very little to play, which is always going to make it a hit with players on shoestring budgets. There are other Native American-themed slots out there, but this one is arguably more enjoyable than its counterparts, and certainly better-looking.