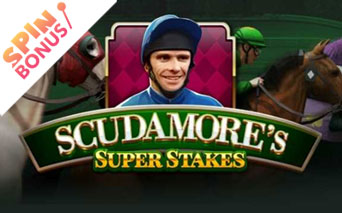 Scudamore’s Super Stakes slot is NetEnt’s answer to Microgaming’s Bookie of Odds, Playtech’s Frankie Dettori’s Magic Seven, and other rival providers’ horse racing-themed games. This one is based on Peter Scudamore, who if you didn’t know bagged over 1,500 wins and is regarded as arguably the best jockey of all time. The slot machine is not officially licensed; it also comes with an array of special features which will even please players who aren’t fans of horse racing slots.

The Net Entertainment developed slot machine is played over 5 reels, and upon those reels sit the unusual number of 32 paylines. Of course, wagering on individual paylines is a no-no for most modern slot games from this Scandinavian software developer. So, with that in mind, bets cost as little as 10p a game and indeed no more than £100 a pop. Prizes are lucrative enough, sitting at 1,000x a bet, and there is a moderate but fair return to player rate of 96.1% in this online casino slot machine.

Perhaps unsurprisingly Peter Scudamore is the game’s substitute symbol. As a wild icon, he can replace all others barring the scatters, which in this game appears as a golden and shiny trophy. Players will note that to the right-hand side of the reels is a betting slip. This betting slip is sort of like a side-bet feature.

Players can choose which symbol they think will appear the most on the reels over a certain number of spins. A side-bet is wagered in this manner. If players are correct, they can pocket prizes based on the odds the betting slip feature gives. This slot also has a randomly triggered bonus to offer players. When it occurs, between two and five wilds will appear on the reels (they look like horseshoes) to ramp up your odds of success.

Now, back to the scatter icon. This symbol can only appear on the first, third and fifth reels. Landing it on all three at once will activate the Peter’s Classic Cup bonus. In this round, the reels expand to become four rows high. Players can select one of the four horses which appear on the screen, and each has its own chances of success and thus its own cash prize in relation to that. The symbols on the reels are coloured the same as the four horses. Every time a win occurs, the horse which has the same colour as those winning symbols will move one place across the track. Once a horse has finished the race, the bonus round ends and winnings (if you’ve landed any) are paid out.

Scudamore’s Super Stakes is a proper horse racing-themed slot for those players who want a touch of realism in their game. There are other similarly themed slots out there, and for the most part, they are all outstanding. However, the betting slip feature, and the way that probability and odds play such a significant role in this release make this one stand out from the rest of the pack.