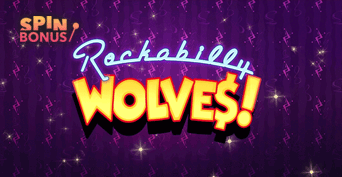 How To Play Rockabilly Wolves Slot

Rockabilly Wolves is exactly what happens when a casino software provider goes for zany approach with their new slot. While the essence of this Just for the Win slot is loosely based on 1950s music, players will not be able to escape the fact that there is arguably more of a Looney Tunes vibe to the Rockabilly Wolves slot than anything else. This quirkiness presents players with what is arguably a breath of fresh air at a time when online slots tend to be becoming similar.

Developed by Just for the Win (JFTW) but launched on Microgaming’s Quickfire platform, Rockabilly Wolves is a 5-reel, 20-line slot. It can be played somewhat cheaply, with a two-for-one payline deal available meaning that players will end up wagering between 10p and £50 a spin on this game. Prizes are a little on the cheap side (at just 20x your bet), but the slot is a low variance release and one which has a generous RTP (return to player) rate of

The free spin symbol in Rockabilly Wolves is easy to spot, the icon uses plain text (free spins) to announce its presence on the reels. Players need to acquire these symbols on the second, third and fourth reels if they wish to trigger the slot’s free game bonus round.

Can I Get Free Spins & Bonuses on This Slot?

Yes, Successfully triggering the bonus round in the slot initially offers players a total of 9 free spins. However, if a bonus symbol lands on the third reel (and it may have been done during the base game), it will become a sticky wild and remain in place until the feature ends. Any further bonus icons landing on the reels will also become sticky until the feature comes to a conclusion. Players can land win multipliers which rise from 2x upwards with each successive win, too.

Landing bonus icons on the reels is no bad thing in Rockabilly Wolves. Every additional scatter which appears can help offer another 3 free games. They just need to appear on all 5 reels at some point during the round for that to occur.

Whether you like the idea of playing cartoony or musical online slots, there is something nutty and barmy for you to get to grips with in Rockabilly Wolves. The slot’s pay rate is decent, and wagers are cheap and affordable for most players. As for the features, they appear run of the mill, but there is an added sense of excitement to be had from playing them. Any player looking for something refreshing may just find that the Rockabilly Wolves slot offers them precisely that.