Rainbow Riches should hold a special place in the hearts of many casino players across the net. Few other online slots have spawned as many sequels, follow-ups and spin-offs as this Irish luck franchise from Barcrest. Common not just at UK casino sites but across European sites, too; Rainbow Riches can easily be regarded as the definitive Irish luck slot and sets the bar high for its counterparts.

This first game in the series (which now has almost 10 different titles) features 5 reels and 20 paylines. Players are going to be able to take total control over their bets, with all twenty lines adjustable. Line bets can also be altered, so expect to find wagers which range from 1p per line per spin, up to £400 a turn on this release. A decent non-progressive prize worth 500x a bet can be snapped up in this game, which admittedly has a bog-standard return to player (RTP) rate of 95%. 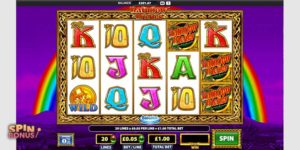 There is no shortage of symbols on the reels of this slot. The high-playing card icons dish out small wins, while the thematic icons are all special symbols. Golden coins appear as wilds and can substitute for any icons save for other special symbols.

Landing 3 wishing well symbols on the screen in any position will activate a Wishing Well bonus. In this click and win feature, players can select one of those reels to pocket an instant win cash prize in the form of a multiplier.

Alternatively, three pots of gold symbols will trigger a Pots of Gold bonus, and 3 leprechauns will trigger the Road to Riches bonus. Both these bonus rounds (like the Wishing Well bonus) tend to offer multiplier/instant win cash prizes, rather than spins. Even so, the wealth of bonuses is much appreciated by players.

When 3 pots of gold show up on the second, third and fourth reels, the Pots of Gold bonus will allow players to select from 12 spinning pots of gold. Players will snap up a cash prize and/or multiplier with this feature.

Meanwhile, landing 3 leprechauns anywhere on the screen triggers the Road to Riches bonus. In this round, players can work their way along a trail by spinning a fortune wheel. It can see them dish out more multipliers and cash prizes as the leprechaun navigates his way along the path. 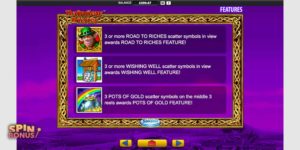 The one thing that this Barcrest slot is really missing is a free spin bonus round. There isn’t one in this release. Perhaps surprisingly, there aren’t many in the other many Rainbow Riches slots, either. However, this game has proven immensely popular all the same. It can be found at most top UK casinos, and if players get their kicks from this game, they will likely find one of the many other top slots in this series appealing, too. Rainbow Riches games now include progressive prizes and have even been transformed into bingo and Slingo games, but it all began with this slot.

Irish luck-themed slots are plentiful enough in the online casino world, and part of that is down to the success of Rainbow Riches. This slot series has spawned plenty of sequels, each diverging from the original game in their own way. This release – Rainbow Riches: Pick ‘N’ Mix – comes with the option to wager extra cash for bonuses, and no shortage of them at that.

Rainbow Riches: Pick ‘N’ Mix is a 5-reel, 30-line slot, but one which will only cost 20p a game at its cheapest. Players can flesh out their bets up to £500 if they see fit. Bear in mind that the Big Bet Mode is the quickest way of obtaining special features in this release, but it costs a fair bit to implement. Prizes are capped at 500x your total bet in this game, which has a varying RTP range based on whether you are playing with the Big Bet Mode active or otherwise.

Gold coins with a leprechaun on them act as wilds here, and these can substitute for all symbols barring bonus icons, there are going to be at least three of those on the reels.

Before the game begins, players are required to select 3 out of 5 possible bonus rounds which they wish to play with. This will also affect the return to player rate in the game. Players can trigger bonus rounds with 3 or 4 symbols appearing on the reels.

The first of the bonuses is the Road to Riches Bonus, which is activated with 3 or more leprechaun faces and offers a multiplier money wheel-based trail bonus. The Pots of Gold Bonus is triggered by 3 or more pots of gold icons and allows players to select one of them to win a cash prize. In the Cash Crop Bonus (triggered by 3 or 4 leprechauns) players can collect instant cash prizes from spinning coins, with the chance to accept or reject them being offered three times. The fourth bonus is the Magic Toadstool feature, triggered by landing 3 or 4 toadstools. It provides another instant win bonus, with players pocketing multipliers or cash based on their picks.

This Rainbow Riches free spins bonus is triggered when 3, 4 or 5 stacked free spin icons show up on the first, third and fifth reels. Between 10 and 30 spins can be won, with scatters acting as extra wilds stacked on the first reel of this round.

There is plenty to choose from when it comes to bonuses in this slot, which is where the game gets its Pick ‘N’ Mix name from. Most of the features you can find in this release can be found in the original Rainbow Riches slot, as well as some of its other sequels. This is a slot series which keeps on giving and sets the bar high for all other Irish luck-themed slots to follow. This Barcrest release is very much worth a look if you like Irish luck slots.

A good number of Barcrest’s Rainbow Riches slots have features which are identical to one another. However, when it comes to Rainbow Riches: Drops of Gold, originality is very much at a high. There is still the same Irish luck theme running throughout this game, but the imagery on the reels, even the reels themselves have a radically different look.

There are five main reels located in the bottom half of the screen, upon which sit the game’s paylines. As many as 200 paylines can spring up in this release, and the way that the game works is quite distinctive. We’ll come to the payline structure in a moment, though. First, players need to place a bet. These range from 10p up to £500 a game, unless the Big Bet (buy-a-bonus) mode is active, in which case they cost substantially more. Players can win up to 1,000x their bet in this Irish luck slot.

Two wilds make their appearance in Rainbow Riches: Drops of Gold. The silver ones can substitute for all icons barring bonus symbols, while the gold ones can replace any other icons in the slot without exception. The latter are known as Drops of Gold symbols.

If a Drops of Gold wild lands on the fifth reel, any silver or gold pots which appear on the rainbow reels (located above the main reel set) will drop down onto the reels, acting as a surplus of wilds. It is through this feature that players will be able to acquire the most significant and most valuable of their wins.

Players have the option of enhancing their gameplay with the Big Bet mode. A fixed £20 Big Bet can see the Drops of Gold symbols on the fifth reel become stacked, making it more likely that they will trigger the feature. A £30 Big Bet will do the same but ensure that more wilds appear on the rainbow reels. Lastly, a £50 Big Bet will do all the above and remove the low-paying symbols from the reels, as well as increase the number of lines to 200 in total during the free spin bonus.

When 3 or more of the bonus icons appear on the reels in this game, a free spin bonus is triggered. This can see players offered 8 free games, as well as an extra 4 spins for each icon which appears. During the free spin round, the number of paylines which are available can rise to 200 in total if the Big Bet Mode is activated.

Rainbow Riches: Drops of Gold is undoubtedly entirely different from the many other Rainbow Riches slots you may have come across. The original gameplay the game provides is quite unlike many other video slots, too, and that naturally helps it stand out. This is particularly important in a genre which contains over a hundred different similarly themed slots available for you to play at online casino sites.