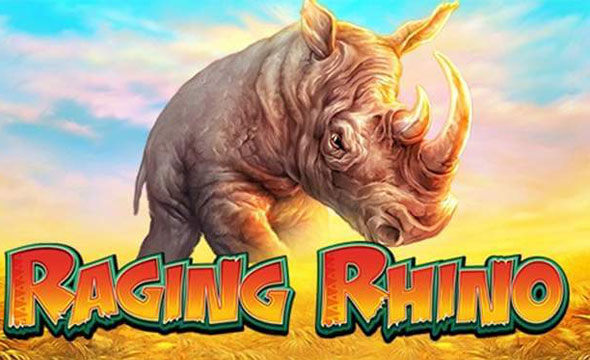 What is The Feature Symbols?

The highest paying symbols in Raging Rhino are:

‘Wild’ is represented by a tree symbol and ‘feature’ is a Diamond symbol.

Wild symbols replace all other symbols to complete wins, although they cannot replace Feature symbols.

What is Any Way Pays?

Only one symbol from each reel will be contained in winning combinations. Any symbols in the grey zone of 4, 16, 64 or 1024 ways will not be evaluated, but this doesn’t apply to feature symbols.

How do I Get Raging Rhino Free Spins

The Scatter symbols allow you the opportunity to activate the Free Spins Bonus round, which can be achieved if you collect at least three Feature symbols on consecutive reels.

If another three or more feature symbols land on the reels while playing this feature, extra spins are awarded on top of the number of free spins you have left to play. The number of extra free bonus spins awarded are the same as in the base game. During this feature, each of the Wilds that appear in a winning combination on reels 2, 3, 4 and 5 will transform into Wild 2x or 3x. If the x2 or x3 wilds land any winnings will be doubled or tripled.

Why You Should Play Raging Rhino Slot

This popular slot game offers a generous amount of free spins complete with multipliers and a plethora of wild symbols.