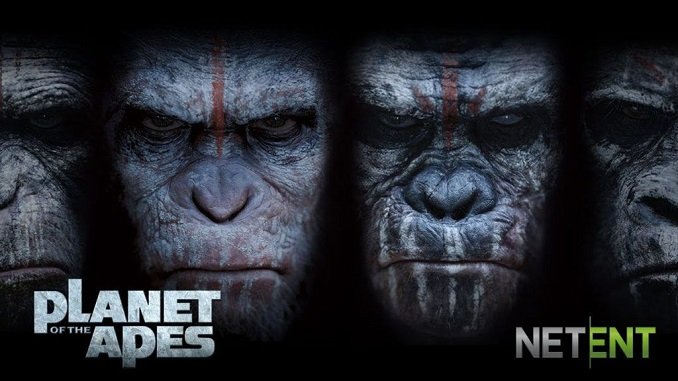 Planet of the Apes slot is a NetEnt release based upon the huge Hollywood blockbuster.

The left reel set is known as ‘Rise’, and the rightmost is ‘Dawn’. Wild symbols appear in two colours. The Rise reels feature a gold wild, and the Dawn reels contain a red wild. Both types of wilds can substitute all other symbols on their respective reels, with the exception of the bonus symbols. Stacked wilds that appear on the first reel of the Rise reel set will be duplicated on the first column of the Dawn reel set.

Before any spin, a randomly triggered Dual Feature may occur. This can see one symbol from each set of reels selected. This (and all instances of it) will become frozen, with you offered re-spins to add to that winning combo until no new wins occur. If a symbol lands on the wrong side, it switches over to its proper reel set.

Bonus rounds exist for both reel sets in this release. Landing the Rise symbol on the first reel (of the Rise set) or the Dawn bonus icon on the fifth reel (of the Dawn set) will trigger each respective bonus. The Rise Bonus promises to turn every human and ape icon into cash prizes. The ‘Rise’ free spin round offers 10 free spins, with all wilds collected and redistributed on to the reels for a Super Spin at the end.

The Dawn Bonus turns the human and ape symbols into the same icon. he Dawn free spins bonus offers 15 free spins, during which flame symbols can fill metres that offer further spins, multipliers or added wilds.

Why You Should Play Planet Of The Apes Slot

Not only does this NetEnt slot showcase a thrilling theme, the game is enhanced further by exciting dual bonus features.