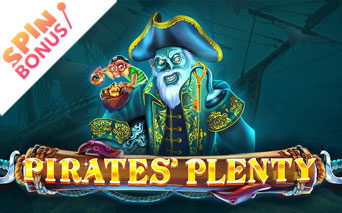 What is Pirates Plenty Slot?

Red Tiger Gaming’s Pirates Plenty slot has all the elements of a traditional pirate-themed slot, and also suffers from some of the same pitfalls. The game is themed on ghost pirates (which is very Pirates of the Caribbean), and that means that as far as its theme and imagery go, it could hardly be called unique. However, Red Tiger seems to have made up for this by making sure that Pirates’ Plenty has numerous and exciting bonuses available.

What Are the Bets & Ways to Win?

Pirates Plenty slot offers 20 fixed pay lines spanning its 5 reels, although, in theory, there is a special sixth reel that comes into play a little later in the game. Bets are going to be fairly simple to work out, and they range from 20p a game up to no more than £100 a spin. The return to player (RTP) rate in Pirates’ Plenty stands at 96.1%, and its non-progressive jackpot of 50x your stake means that everything here is relatively standard fare for a video slot.

The Treasure Reel has the potential to unlock the sixth reel in this slot, as mentioned above. For that to occur, players are going to need to collect map symbols on the reels. Once it has been unlocked, the Treasure Reel remains in place for any future spins a player makes, provided they don’t adjust the value of their wager. If they do, they will have to unlock it again.

What Are The Treasure Reel & Wilds?

Pirates’ Plenty’s Treasure Reel can dole out quite a few special features to players. One of the first you may come across is wilds. Wild symbols appear as ships in bottles. These stacked symbols also dish out multipliers which range from 1x up to 5x the value of any winning combination in which they appear. Pirate ships wilds can sail across the reels to deliver big wins to players. Ocean Spins logos are required if players want to trigger a free spin bonus. It is rare that Red Tiger offers free game features, so this is a real treat. Three of them appearing on the screen is sufficient to activate the bonus round.

Can I Get Pirates’ Plenty’s Free Spins & Bonus Features?

Yes, once the free spins bonus begins, players can start spinning the reels to bag wins. They may wish to keep their eyes peeled for the ghost pirate captain. He can unlock sunken treasure chests during this round. Those treasure chests could offer additional free spins, or turn the lowest paying icons in the slot into wilds. The same feature can be had at random, courtesy of Wild Monkey symbols which only appear in this bonus round.

Pirates Plenty slot may not be the most original game that Red Tiger Gaming has created, but it is one of the rare few from this provider which offers a free game feature. More to the point, although its wins are petite, they do tend to pop up rather frequently. Provided you aren’t tired of pirate-themed slots, Pirates’ Plenty likely has enough about it to keep you entertained.