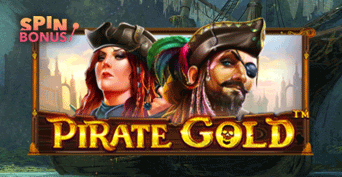 How to Play Pirate Gold Slot

It is quite easy to end up playing the wrong slot if you’re not careful here. There are plenty of slot machines out there on the net with this title (or one very similar to it), but this release represents Pragmatic Play’s take on the swashbuckling pirate genre of slot.

What are the Stakes & Volatility

A word of warning about Pirate Gold slot. This is a highly volatile slot, so although the wagering range of 40p up to £200 a spin is reasonable, don’t be fooled. Wins tend to be far apart. When wins do happen, they tend to be rather considerable, as mentioned above. Pirate Gold is a 5-reel, 40-line, Pragmatic Play developed release, and it is one of the better-looking pirate-themed slots doing the rounds on the net.

What are The Symbols & Special Features?

While the pirate characters (both male and female) dole out top prizes, the wild symbol is arguably just as lucrative. This wild symbol will take the place of any required to land a win, save for scatters and bonus symbols. It only springs up on the final four reels, being absent from the first.

Can I Get Pirate Gold Free Spins?

After triggering the bonuses feature, players are gifted 10 free games, as well as a scattered cash prize that is worth the equivalent of their bet. The free spins bonus may take place on a different set of reels, where the pirate characters are now wilds on the second to fifth reels, too, but in other ways, it is a mundane and simplistic free spin round.

What are the Jackpot Features?

Pirate Gold slot is notable for containing three major jackpot prizes, while none of those happens to be progressive, they can still dish out wins worth up to 32,270x your total bet. The jackpot bonus is far more exciting. Known as the Lucky Treasure Bag feature, players will get to spin the reels, with all 8 (or more) money bag icons from the triggering spin frozen into place. Just money bags, re-spin icons, multipliers and blank spaces appear during a total of three re-spins. The idea is to try and land as many money bags as possible to snap up prizes, which could include the Minor, Major or Grand Jackpot prizes. Remember, though, the jackpot prizes are non-progressive.

Why Should I Play?

There is a surplus of pirate-themed online slots available to play, so players may need a bit of persuading that Pragmatic Play’s Pirate Gold slot is a step above the rest. The features in the game go some way to doing that, and from a graphics perspective, the slot is on top of its game. However, with the volatility level being what it is, it certainly seems as though Pirate Gold is going to primarily appeal to high rollers over the average, run-of-the-mill slot player.