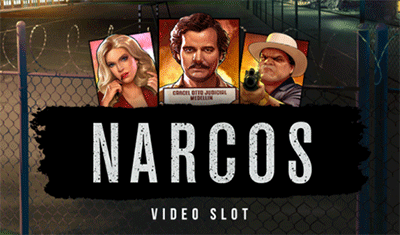 How To Play Narcos Slot

Narcos is an extremely successful TV show exploring the crimes of Colombian drug lord Pablo Escobar and other big players in the Colombian and American drugs trade. Now lovers of the series can enjoy it in a new way, with the release of an online slot machine game. The Narcos slot game from NetEnt is based on the hit show, offering a taste of the gritty 1970s and 1980s underworld to slot lovers everywhere. The game has plenty to recognise from the show, including key characters, guns, explosions and of course plenty of cash. However, it’s not as intense or adult as the programme itself.

How Many Ways to Win Are There?

The Narcos slot game gives you 243 ways to win to ensure things always stay exciting. There are lots of extra features and bonuses, offering you free spins and unique opportunities to win more. There’s plenty to know and perhaps love about this new slots game, so take a look at the information we have on it and our take on whether it’s worth playing.

Slots games might work on essentially the same principles, but it’s the graphics and theme that can make individual games exciting. For the Narcos slot game, they have chosen to use illustrations of the characters in the show, rather than images of the stars themselves. All of the key characters are included in the game’s visuals, even if they’re not exactly the real thing. The graphics are still attractive, and it’s fun to spot your favourite characters.

The game also includes other symbols and images relating to the show, from flamingos to aeroplanes and playing card symbols. If you’re looking for a thrill and to get immersed in the shadowy world of Narcos, this game is fun and exciting. Other graphics for the game include the street scene behind it, which changes for some of the bonuses to show more Narcos-like scenes. The game has a reel backdrop that works with the illustration style of the game.

As for the music in the game, there are mariachi-style tunes. Not exactly what you would find on the Narcos slot soundtrack, but it does help to create the right feeling and atmosphere for the game. The visuals and the sound combined offer a high-quality slots game that you’re sure to want to play if you’re a fan of the show.

What Are All The Ways to Win?

With 243 ways to win on the Narcos online slot game, you have plenty of chances to nab a prize. You can win by matching symbols on the adjacent reels from the left side, which means that you have a high chance of landing a winning combination. The game has an RTP of 96.23% and a medium-high volatility rate, which is similar to another recent release from NetEnt, Dead or Alive 2. There are five reels and three rows in the game.

What are the Stakes & Betting Options?

There’s a broad range available for your bets, from 0.20 to 400.00, so whether you’re keeping your budget low or you want to splash out, you can spend as much as you feel is appropriate. It’s up to you to set your limit when you’re trying to win. You can play the game on several platforms too, including desktop and mobile devices featuring iOS or Android. It offers smooth gameplay on all of the different platforms.

How to Get The Narcos Slot Free Spins & Bonus Features

One of the best things about online slots is the bonus features, which are usually different enough to offer a unique experience for every game. There’s plenty of action in the Narcos slot game, with fun bonuses including wild symbols and. For example, a Walking Wild symbol stays on the reels during a winning round and move one place to the left in the next spin until it’s no longer on the reel.

When the Locked Up symbol appears three times in the same row, you will be awarded a gold coin at the start of a bonus round. It’s shown in the form of a mugshot of Escobar. You get three free spins that show Locked Up symbols and golden cases, which can open to reveal more rewards, including spins, coins and multipliers. You also get a fun change of visuals during the round, with a switch to a prison scene in the background to keep things interesting.

Free spins are available in the game too, triggered when at least three Scatter symbols land on reels 1, 3 and 5. The Drive-By feature, which randomly occurs during the game, turns character symbols into extra wild symbols – using a car moving past and shooting bullets at the symbols. The graphics change during free spins, including exploding car symbols and a gun battle. High-value symbols can turn into walking wilds if hit by bullets and there will be more free spins to enjoy if they’re still left on the screen at the end of the round.

The Narcos slot game from NetEnt offers lots of fun gameplay for fans of online slots. If you like other crime-themed slot games like Scarface slot, which is also from NetEnt, you will enjoy the Narcos slot game. You don’t need to be a fan of the show to have fun with what the game has to offer, so you can still get stuck into it. The fun illustration style is a bit like Grand Theft Auto, and the graphics change often enough to be entertaining through different rounds.

If you do like Narcos, you’ll have even more fun with this game, spotting your favourite characters and enjoying the references to the themes of the show. There’s plenty of action and interesting features to keep you invested in the game, plus a wide range of betting options so that you can control your bets. Whether you are a fan of Narcos or not, you can have plenty of fun playing this visual and exciting slots game. Try it on a desktop or on your mobile device to see what it’s like for yourself.