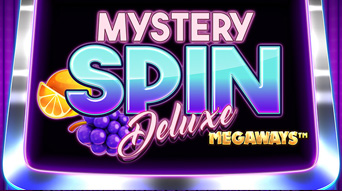 Mystery Spin Deluxe: Megaways slot is a Blueprint Gaming release and was launched in June 2019.

Fruits and high playing cards, as well as sevens, litter the 6 reels of the Mystery Spin Deluxe: MegaWays and they can dole out decent enough wins.

This is a medium to high variance release, with a Return to Player rate of 95%.

Wild symbols can make landing wins a touch easier in this release. You can expect to find them appearing as blue squared symbols, with “wild” written diagonally across them. Wild icons can substitute for all icons save for mystery symbols, in a bid to aid you in landing a win.

Those mystery symbols appear as the game’s title logo. These icons can transform themselves (and all instances of them) into the same icon. This won’t guarantee a win, but like wild symbols, they make winning a touch easier than if they weren’t there at all.

What is The Synced Reels Feature?

There is also an In-Sync feature worked into the design of this game. Unlike ‘Power Reels’ games, it can occur at random on any spin. When it does, as many as six reels can lock and display the same symbol. These synced reels once more make landing a win much easier.

Why You Should Play Mystery Spin Deluxe MegaWays Slot

Mystery Spin Deluxe: MegaWays comes equipped with three very handy base game features. In fact, it has four if you count the fact that a random number of lines appears on each spin.