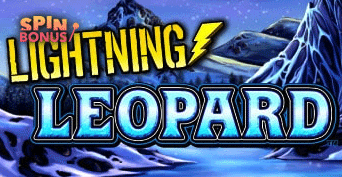 Lightning Leopard is a non-progressive casino slot, so players shouldn’t be lured in by the jackpot prizes located to the right of the reels. These are fixed, and which prizes you can snap up depends on how much you wager per spin. Bets on this 5-reel, 40-line game tend to stretch from 40p a game up to £50 a spin, with the top prize being capped at £62,500 when playing with the maximum stake. This can only be won during the randomly triggered Lightning Jackpot Bonus.

What Are The Symbols & Special Features

Both wild symbols and scatters can pop up on the reels of this game. Landing the Snow Leopard on the reels will see it substitute for any other icons you may need to land a winning pay line. Wilds can also dish out prizes worth up to 600 coins when they appear on the reels in winning combos.

Lightning bolts appear as scatters, and you will need at least six of them to trigger the Lightning Re-Spin Bonus. Scatter symbols can appear stacked on the reels of this game, and this is what will potentially help players unlock the feature.

Is There A Jackpot Bonus?

Jackpot prizes in this game can be won at random via the Lightning Jackpot Bonus, or they can be acquired via the Flippin’ Re-Trigger Bonus, which we will come to in just a moment.

How Do I Get Lightning Leopard Free Spins & Bonus Features?

After 6 or more Lightning bolt scatters appear on the reels, the Lightning Re-Spin Bonus begins. A total of three re-spins are offered to players. Any lightning bolts which activated the round will be held in place for the duration of the round. Any further scatters which appear will also be held. At the end of the round, the scatters will flip over to reveal a cash prize.

How to Trigger Lightning Re-Spins

If players have managed to acquire at least 15 lightning bolts during the Lightning Re-Spin Bonus, they will trigger the Flippin’ Re-Trigger round. This can flip all of the bolts once more, to offer up another cash prizes. At the same time, it may also be possible to win one of the jackpot prizes with this bonus feature.

Lightning Leopard is a basic game, without too many flashy features worked into its design. However, the symbol flip features available via its two bonus rounds can provide some shockingly decent wins. That comes at a cost, though, and that cost is the somewhat expensive minimum bets. Aside from the features in the game, Lightning Leopard doesn’t have too much to offer players in the way of nifty goodies or excitement. It can be found at all the best casino sites which provide Lightning Box Games developed slots.