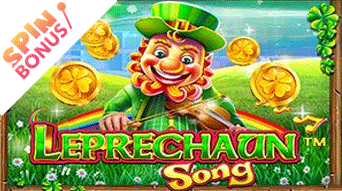 Leprechaun Song is one of many Irish luck-themed slots you can find at any number of the best slots sites in the UK. This release is just as generic as the others you will see, with leprechauns, pints of Guinness and clover-sprouting pipes present on the reels of the game. Developed by Pragmatic Play, this game may be generic, but it has enough decent features to enable it to compete with those titles from rival developers.

Pragmatic Play’s Leprechaun Song slot has a standard 5-reel, 20-line engine for players to enjoy, and wagers are predictably going to cost anything from 20p per spin, up to £100 a game at most. That makes it suitable for most players, whatever their budget. Non-progressive prizes are a touch on the petite side, though, at just 40x. This game is a low-risk slot, with a return to player rate which sits at around 96.4%.

The same types of symbols appear in this game that you will find in other similarly themed slots. Rainbows and pots of gold are of particular value as they are special icons. The former act as wild symbols and can replace any others you need to bag a winning line, save for the scatters mentioned just a second ago.

Those pots of gold scatters can trigger a free spin bonus when they appear on the first, third and fifth reels of Leprechaun Song. One of three potential bonus features will be triggered when they do show up.

There are also several randomly triggered bonus rounds in this game. These come without warning, but few players will grumble at that. Raining Wilds can add extra wilds to the reels, while ‘Pick a Fiddle’ bonuses can see between 1 and 5 fiddle icons dish out a cash prize.

Lastly, the Giant Bonus coughs up a 3×3 colossal icon which can make winning a whole lot easier on the Leprechaun Song slot. These randomly triggered rounds also make an appearance (in a manner) in the free spin bonus.

Players won’t get a say in which of the three special bonuses they will trigger. On the one hand, they could land a Coin Collector bonus which awards 15 free spins with 2x multipliers doubling their winnings. Scatters will increase multipliers by 1x. Alternatively, a Giant Symbols bonus can see 3 spins played with colossal icons appearing on the reels. Lastly, a generic free spins bonus allows players to select from several mushrooms to land a random number of spins and multipliers until a collect sign appears. Between the three features, players are guaranteed to take home more than decent winnings, especially given the low stakes involved.

Many of the features which show up in the Leprechaun Song can be found in other Irish luck-themed slots. When combined, though, they make quite the game. This Pragmatic Play developed slot is perhaps not as widely spread as other titles, such as Barcrest’s Rainbow Riches, but that might change once players realise how entertaining this game can be.