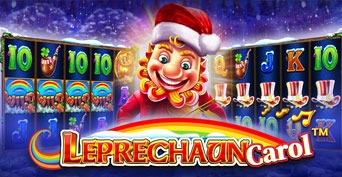 Launched in November 2018, Pragmatic Play’s Leprechaun Carol is a fusion slot, blending together Irish luck and Christmas themes. The release, like many other slots with Irish imagery in them, is a very colourful release, but moreover, it comes jam-packed with an excellent array of mini-features and proper bonus rounds.

Familiar icons such as leprechauns, smoking pipes and pints of Guinness are worth considerably more than their high playing card counterparts in this release. Leprechaun Carol features just 20 paylines, but players have a flexible betting range that rises from a floor of 20p a game up to £100 a spin.

As mentioned, the slot is riddled with great bonuses, but unfortunately, those bonuses do impact the value of the prizes at hand. At most, players can hope to win 50x their stake on this release. The return to player (RTP) rate is still decent enough at 96.53%, though.

Wilds aren’t difficult to spot in the game, they show up as rainbows with an appropriate number of Christmas pressies beneath, these substitute symbols can replace any other with the exception of the pots of gold symbol and help players land a win. Golden pots can appear on the first, third and fifth reels. Pocketing them on all three reels simultaneously will activate one of the three proper bonus rounds the slot has to offer at random.

Speaking of random, there are four randomly triggered bonuses that can be snapped up in the base game on any spin.

One such bonus can add extra wild symbols to the reels. Another can slap a colossal 3×3 expanding symbol onto the reels.

If players already have two scatter symbols in view, a nudge feature may push down the all-important missing third scatter to trigger the bonus feature.

Lastly, a fourth in-game modifier can see players select a fiddle from those displayed on the screen to win an instant cash prize.

Players will be rewarded with 1 of 3 random bonuses when they trigger the feature with pots of gold scatters; all are free spin bonuses. The first affords players 20 free games with a 3x multiplier. They can also select from a series of mushrooms to bag extra multipliers, wilds or spins.

The second bonus provides 15 free spins with a 4x multiplier, while players can snap up coins for additional free spins and multipliers. The final option promises 3 spins, with 3×3 colossal icons capable of popping up on the reels to help dish out wins in this unique slot.

Initially, the sound of a Christmas and Irish luck fusion slot doesn’t sound too appealing. How can that theme possibly work? It does, though. Part of the reason this slot has gone on to be as successful as it has in no time at all is mostly down to the surplus of features it carries, and its cheap stakes. Again, they come at a price, though. That price is a shrunken non-progressive jackpot cash prize.