Players don’t have to travel far and wide to find Cleopatra themed slots on the net. There are plenty of these out there to play. However, few are as fun and funky as Playson’s Legend of Cleopatra game. Of course, generic Ancient Egyptian aplenty can be found on the reels, but Queen Cleo herself has been given a very modern, glamorous look to keep things fresh. If that wasn’t enough, the gaming structure present in this release is also very much new to the genre. 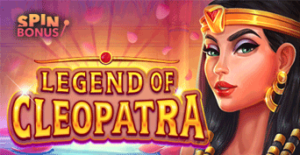 Legend of Cleopatra features 6 reels, but they certainly aren’t conventional; far from it. Instead, the first reel consists of just 2 rows of symbols, with the second and third reels offering 3 rows, the fourth reel offering 4 rows, and the fifth and sixth reels consisting of 5 rows of symbols. In all, over 100 paylines span the reels of this slot. With a stroke of luck, players could net prizes worth 500x their bet in this game. So, what will Legend of Cleopatra set you back? Minimum stakes are limited to 20p a game, while ceiling bets are capped at £100 a game, which is fair and reasonable.

Wild symbols aren’t difficult to spot on the reels of this game. They appear as golden emblems (with “wild” written across them), and they can substitute for all barring scatter symbols. Wilds also dish out decent wins as the best-paying symbols in the slot.

Scatter symbols can appear as scarab emblems. These icons can also dish out prizes, this time worth 5x, 10x or 15x your bet whenever 3, 4 or 5 show up on the reels. You’re going to need at least three of them to trigger a free spin bonus. 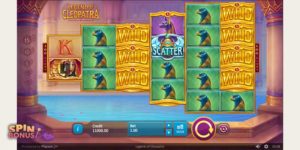 Legend of Cleopatra comes with a golden reel (the fourth reel). If that reel is covered with stacked wild symbols, another reel will be chosen at random to also benefit from stacked wilds. This can see big wins accumulated rather rapidly. This is known as the Double Wild Feature.

As mentioned, scatter icons can trigger a free spin round in the Legend of Cleopatra slot. Slot players will start with between 5 and 15 free spins. However, the reel structures are reversed for this round. Landing just two or more scatters will add a further 2 to 20 free spins to your tally, too.  No other goodies, perks or bonuses are applied to the free spin feature, although you can still prosper from the Double Wild Feature should you happen to land it.

Legend of Cleopatra is a funky take on an age-old genre of slot games. This Playson slot is easily one of the better and more original titles you will find in this genre and comes with creative and innovative features, as well as decent prizes. It is inexpensive to play, features cracking graphics and works well as a mobile slot, for those players who fancy a touch of slot gaming on the go.