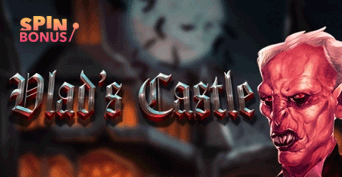 How To Play Vlad’s Castle Slot

There are plenty of Dracula-themed slots out there on the net. Not all of them are worth their salt. Some are too childish, some cartoony, and some miss the point of Bram Stoker’s novel entirely. Despite being developed by Eyecon – one of the smaller software providers around – Vlad’s Castle is bang on the money and delivers everything you would expect from a vampire-themed slot.

Vlad’s Castle slot is initially a very simple game. It features 25 non-adjustable paylines spread over its 5 reels, and that means there is a very generic wagering range stretching from 25p a game upwards.

However, the maximum bet is capped at £12.50 per spin, which makes this game affordable for all, even for those who wish to place big bets. Non-progressive prizes are respectable at 5,000 coins in value and are yours if you can land five victim symbols on a line. The RTP (return to player) rate is fair but bog-standard, at 95.3% in all.

Of course, players won’t be expecting a wealth of features in this Eyecon developed slot. But just because the vampire-themed release isn’t jam-packed with them, doesn’t mean that there aren’t decent enough bonuses to be had.

Wild symbols appear as Vlad the Impaler (Dracula to you and me) and he can replace himself with any others you may need him to be to dish out a win on the lines. The only exception to this rule are scatters – he cannot substitute for castle symbols. Any winning combination which happens to feature wild symbols will have its value doubled. It is also worth stating that the Vlad wild can also be used as a scatter, as it can trigger a free spin bonus round.

Can I Get Free Spins & Bonuses

Yes, Vlad’s Castle slot offers a couple of bonuses for players. The castle scatters can trigger a Portrait bonus when three or more show up on the reels. In this feature, players can select castles to win instant cash prizes worth up to 100x their bet.

Back to the wilds now; they can trigger a free spin bonus when three or more show up on the screen. In this round, players will start with anything from 15 to 50 free spins, depending on how many scatter wilds they located. Vlad wilds can triple the value of all wins in which they play a part in this feature, and the slot bonus round can be retriggered by landing three or more wilds on the screen while the free spin bonus is in session.

Vlad’s Castle slot gets the atmosphere spot on. The dark gothic-style theme and imagery are just what you would expect a Count Dracula-themed game to offer. The features will be considered hit and miss by some, but for others, they are more than enough to enjoy the game.

The sad thing is that although this is a significant release for Eyecon and will undoubtedly help them raise their profile, the game is unlikely to be widely available. This means that it is probably going to be unable to compete against other major vampire-themed slots, such as Microgaming’s Immortal Romance, or NetEnt’s Bloodsuckers and Dracula slots.