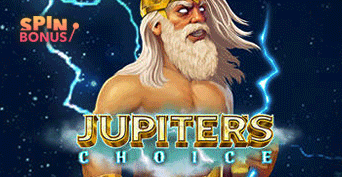 Jupiters Choice is a Relax Gaming developed slot and one which has a popular Ancient Greek mythology theme running throughout it. Grapes, jewellery, and a host of animals (representative of other gods) all pop up on the reels of this simple slot, with the reels themselves, set amidst a golden temple backdrop. Like most Relax slots, this one has a primitive wagering menu and one which is primarily designed for mobile users.

There are 6 reels in Jupiters Choice, and spanning those reels are a groovy 729 lines. With so many paylines present, players were never going to be able to adjust them. Using the coin button, players can still opt to bet anything from a cheap and affordable 15p a spin up to a significantly more costly £150 maximum stake. Prizes are decent enough in relation to those bets, with prizes worth as much as 1,600x your total bet there to be won.

The game’s logo appears as a wild symbol, and like all wilds, it can substitute for standard paying icons to help players land a win. Wild symbols do not pay out any cash prizes on their own.
Jupiter tends to watch idly beside the reels during most spins. However, on occasion, he may come to life and dole out one of two upgrades, which are essentially randomly triggered base game modifiers.

The first of these is the Clumped Reels feature, which can see two reels cloned so that they display the same symbols. The second feature is the Symbol Removal bonus, which can see low paying icons removed from the reels, present players with a heightened chance of landing a win.

A free spin bonus is also present in this game, and players need Jupiter to randomly lock together at least three reels for it to occur. If this happens, players will win anything from 5x up to 100x their total bet, as well as pocket 5 up to 50 free spins. Those spins are played out on a second set of reels, and Jupiter comes in hand during this round, delivering 3 to 6 cloned reels on each spin during the feature. No other special features or bonus rounds have been worked into the design of this game. As such, how prosperous your session happens to be when playing Jupiter’s Choice comes down to luck more than anything else.

The title of this game is rather fitting. Considering that none of the bonuses in the game are won via bonus or scatter icons, and players are left to hope that fate, luck or chance decides to randomly award them a bonus, we can’t fault the title. Moreover, it is Jupiter who chooses your bonus, further solidifying the excellent choice of title by Relax Gaming. The surplus of randomly triggered bonuses means that there aren’t too many other symbols on the reels, so players are never very far away from their next big win when playing this game.