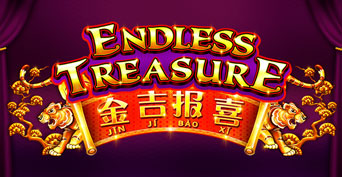 WMS Gaming’s Jin Ji Bao Xi: Endless Treasure is a bit of a mouthful to pronounce, but its gameplay presents far more of a challenge. Like many WMS Gaming online slots, this Chinese-themed release has its own gaming engine, and like its sister slots, the online slot is overly complicated and takes a lot of time, patience and effort to understand how it works.

There are 243 paylines spanning Jin Ji Bao Xi’s 5 reels, but you’ve got no chance of altering them. Instead, players can tinker with their bets to a certain degree. Wagers are cheap in this game, ranging from a floor of 8p a spin up to no more than £88 a spin. Prizes are non-progressive and equally as modest, at 250x a stake.

What Are the Symbols & Special Features?

Located to the left of the reels is a meter. When full, players can transform ordinary symbols into golden ones. This feature costs extra to use, though. Golden symbols are worth more than standard symbols, so this may be something you wish to think about when playing Jin Ji Bao Xi. There is also a wild symbol in this game, and it can appear on the three central reels. It can replace all standard paying icons.

What is the Golden Chance Bonus?

If a wild symbol lands on the third reel, it can turn any symbols into golden ones, and winning combos will be offered a 2x multiplier with this Golden Chance bonus. Bonus symbols can provide a Fu Value above the reels when they land alongside golden symbols. When 6 or more bonus icons appear on the same spin, the slot’s free spin round is triggered.

How to Get Jin Ji Bao Free Spins

In the free spin feature, players start with 6 free spins. Golden coins can add extra spins to your tally, while a Top Up bonus promises players re-spins when they land streaks. Also worked into the design of this free spin bonus round a coin feature. Whenever a yellow coin appears on the reels, some of what you have acquired on the Fu Value counters will be won. Green coins also exist, and they can pay out the whole pot in the Fu Value meter.

Lastly, there is a jackpot round in this slot. This is one of those casino bonuses that can be triggered entirely at random, and once it begins, players can select from a series of coins. Players can choose coins until they match three identical ones. There are four non-progressive jackpot prizes to be won in this feature.

As usual with WMS Gaming, they have put far too much effort into trying to make their game stand out. While few players will grumble at having a wealth of special features in a slot, the way that these work is unnecessarily complicated and at times, frustrating. This is especially so given that the prizes are modest at best, and hardly going to change your life. There are games with just as many features but which are far simpler to learn out there.