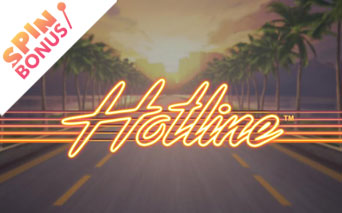 With an old-school theme of decades gone by (and a touch of Grand Theft Auto: Vice City worked in, to boot), Hotline is one of Net Entertainment’s more original releases. The slot has proven to be a relative success for the Scandinavian casino software providers and features the creative hotline gaming engine. More on that in second. First, let’s look at the basic gameplay of the slot.

Hotline slot offers up a 5×3 grid and upon those 5 reels sit a total of 30 paylines. Players are going to find that they get a cut-price deal with the lines in this game, with bets costing as little as 15p a spin for all thirty lines. Of course, if you’ve got cash to burn, Hotline can set you back up to £150 a game. A non-progressive jackpot worth 200x your bet is up for grabs, too, although the RTP (return to player) rate varies in this release. However many “hotlines” you play with will determine the RTP rate, so let’s look at that next.

Ferraris are very handy symbols to have on the reels of this slot. They are wild icons, and can thus substitute for any other symbols in the game, save for the scatter icon. However, when wilds appear on hotlines, they take on another attractive quality.

There are three hotlines in the game. These are marked by yellow spots on the sides of the reels. To begin with, only a single hotline is activated. However, players can select the other two if they wish. Playing with 2 or 3 hotlines will cost players twice and thrice their total bet, respectively.

When a wild symbol lands on a selected hotline, it has the ability to expand and cover all of the positions on that reel. It will also hold itself in place and trigger a re-spin. The RTP rate is adjusted depending on how many hotlines you have activated. The more you have in play, the more costly the game will be, but you stand a higher chance of landing a win.

A standard free spins bonus is also available in the Hotline slot. Players who land three of the sunset scatters on the first, third and fifth reels in Hotline will trigger the round. The bonus round consists of 7 free spins. During the round, any wilds activated by hotlines will remain in place for the duration of the feature. Unfortunately, the bonus round cannot be retriggered.

Hotline online slot is undoubtedly an original and inventive release from NetEnt. The unique gaming structure cannot really be found in any other top slot. Players are in total control of those Hotlines, and it is up to them to determine how prosperous they wish their game to be based on that fact. The fact that you can play with 30 lines for half the stake is not going to be lost on players either Hotline slot is a bargain, whichever way you wish to play the slot machine.