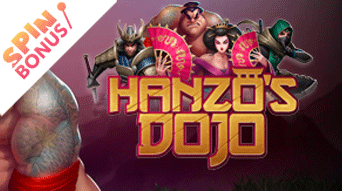 Since it launched in 2018, Hanzo’s Dojo has become something of a success story for Yggdrasil Gaming. This slot frequently appears at top sites, and as many games from this Scandinavian casino software provider, it offers up a touch of originality with its features. Players will no doubt have seen many samurai and Asian warrior-themed slots before, but Hanzo’s Dojo slot is one of only a few to feature quality 3D animated graphics and inventive gameplay.

Hanzo’s Dojo slot offers up a 5-reel, 25-line gaming platform. However, above the 5×3 grid sits a small set of three reels. These can trigger a series of special boosts and bonuses in the game. There is no extra charge for these goodies. In fact, Hanzo’s Dojo slot is cheaper than many other 25-liners, costing as little as 10p a game, and no more than £125 a spin. The non-progressive jackpot prize does offer something of an odd-ball number in terms of winnings (at 235x your bet), but the game is a medium variance slot and features an RTP (return to player) rate of 96.1%.

Golden masks are handy icons to land on the reels of this slot. When wilds appear, they can substitute for any others you may need to bag a win on a payline, apart from the free spins and Hanzo Spin special icons. Now, back to those mini-reels. These rooftop reels spin alongside the main reels, and they can dish out special bonuses as the game is played. One of the three special symbols a player could land is an ‘Expanding wild’. These can drop down to cover the entirety of the second, third or fourth reels.

Also available is the Hanzo Spins icons, and this promises three Hanzo Spins, during which an expanding wild 3×3 icon appears on the second, third and fourth reels. Lastly, you may trigger a free spin bonus round. This can offer players booster symbols that ramp up their odds of success in the base game.

Another way to trigger the free spins bonus is to land free spin gong icons at least three times on the reels (and the rooftop reels count, too). Players will win however many free spins are displayed on those gongs. However, they will also prosper from boosters, as mentioned above. Again, Expanding symbols appear on the three inner reels. The previously mentioned bonus boosters can include an extra two spins, the ability to win in both directions on the paylines, nudging 3×3 colossal symbols, a 2x multiplier applied to wins, and a special wild reel which occupies the fifth reel in the game.

Hanzo’s Dojo slot seems to have everything a modern slot player could want in a release. There are free spins and re-spins, there are wilds and colossal icons, there are paylines that can play both ways, and there are multipliers. Few players would require anything else, making this Yggdrasil Gaming slot one of the best samurai-themed games you are likely to find at any online casino site.