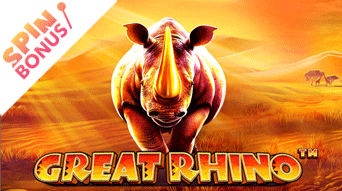 Pragmatic Play’s Great Rhino makes the wildlife of the African savannah its central theme. This casino slot highlights not only the Rhino, but also crocodiles, cheetahs, hyenas and even flamingos on its reels. The game is particularly renowned for its two bonus features, both of which offer decent ways to win via free spins. Fixed jackpot prizes (notably the Grand Jackpot) can see players win up to £500 a turn on this release.

The Great Rhino slot reel structure is nothing out of the blue, there are 20 paylines straddling the slot’s 5 reels, with players able to bet anything from a base minimum of 20p a game, up to a capped maximum and ceiling bet of £100 a turn. Apart from the fixed jackpot prizes, players can win up to 25x their stake per line in this release, which has an RTP (return to player) rate of 96.5%. Given the amount players will be wagering on the release, the Great Rhino slot is a fair paying game

Wild symbols and scatter icons both appear in the game, as you would expect of any modern video slot. Wilds can substitute for any symbols in the release, apart from scatters. Those scatters appear as trees. Wild symbols can also dish out cash prizes, being the best-paying icons in the slot.

Baobab tree symbols will count no matter where on the second, third and fourth reels they appear. Players will, however, need to land at least 3 of them if they wish to trigger the slot’s free spin bonus. Scatter symbols can only pay out cash prizes worth 2x a total stake, and again, players need 3 of those to win these scattered cash prizes.

As mentioned, three scatter icons are required to trigger the Great Rhino slot free spins feature. The bonus begins with just 10 free rounds. Players should make the most of any free spins they do acquire, as the bonus round cannot be retriggered. The main excuse for this is that the rhino becomes a secondary wild, and since it can appear stacked on the reels, your odds of success are far higher than in the base game.

Great Rhino slot is perfect for any player who likes free spins and re-spins. The surplus of free games on offer (as well as the likelihood that they will be triggered) make this an appealing release for such players. The game pays out frequently, and while it would be better if the non-progressive jackpots were progressive, the prizes are at least valuable. Pragmatic Play has ensured that this game can be found at many major casino sites.