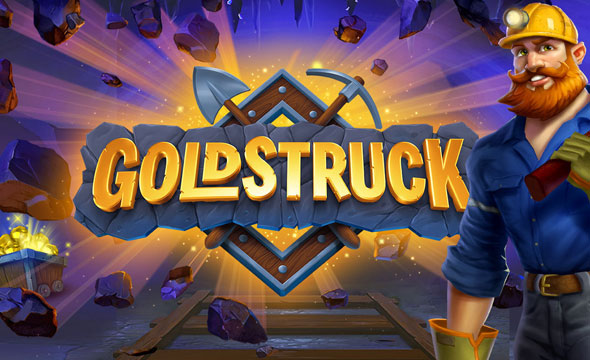 Goldstruck online slot is High 5 Games’ take on a traditional mining-themed online casino slot game. However, there is very little that is conventional about the pay line structure and wagering range in this release. A pay line heavy game, the slot is generous in its payouts, but it does cost a little more than you might expect for a High 5 Games’ developed slot game.

Plenty of gemstones and precious jewels adorn the reels of this casino game, of which the most important is the golden nugget. That symbol acts as a wild symbol, as you might expect from a game such as Goldstruck. Wild symbols can spring up on the second, third and fourth reels of the base game, and these nuggets can replace all save for drill and train bits and helmets.

Those drill and train parts are key symbols to land. Once all three have been located as well as a golden nugget, the three drill/train parts will be interconnected and follow the nugget icon. Any and all nuggets and helmets appearing on the screen will be snapped up. Miners will be placed on the reels in their stead, and a series of re-spins will commence. These will continue to occur until no new nuggets or helmets appear. This entire feature is known as the Wild Train bonus.

What is The Wild Train Bonus Feature?

If you managed to collect at least five golden nuggets during the Wild Train bonus, a free spin bonus round will commence. Just three free spins are handed to you, to begin with. However, every nugget or helmet collected with all another to the tally.

The Wild Train feature is active during this round and collecting a total of twelve or more nuggets during the free spin bonus with the Wild Train feature delivers a non-progressive jackpot. That jackpot, as mentioned, stand at 1,000x whatever was wagered by the player on the triggering spin.

Why You Should Play Goldstruck Slot

This High 5 Games release offers an appealing theme and fun gameplay with plenty of features, helping you to board the golden gravy train.