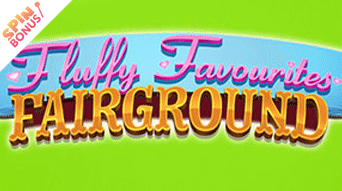 What are the Stakes & Prizes?

Fluffy Favourites: Fairground is played over 5 reels and 25 paylines, and players can opt to use as many lines or as few of those as they see fit. Line bets can range from 1p per line up to 50p per line. Understandably then, the wagering range in this slot rises from 1p per line per spin up to £12.50 a game. Up to 5,000 coins can be won in the game, and there are many possible winning combinations that dish out smaller but equally as tasty prizes. Progressive prizes are up for grabs, too, as mentioned.

Pink elephants are just as valuable in this release as they are in seemingly every Fluffy Favourites slot game. They also serve the same purpose. In this game, they can substitute for all other symbols, as well as trigger bonus rounds. They are, in a sense, scatter wilds. On top of that, elephant wilds can double the value of any winning combinations they appear in.

A secondary bonus feature is triggered when bouncing castle scatter icons appear on the reels. At least 3 or more are required to activate the bonus. In the round, players can win up to 100x their total stake depending on the success of their picks. The number of picks awarded to players depends on how many scatters appear on the reels.

How to Get Fluffy Fairground Free Spins

Players need at least 3 wild symbols to appear on the reels to trigger a free spin bonus. As mentioned, they will pocket scattered cash prizes with these icons, too. Players begin the free spins bonus in the Fluffy Favourites Fairground slot with either 15, 20 or 25 Fluffy free spins, depending on whether 3, 4 or 5 scatter wilds showed themselves during the base game. The free spins bonus is relatively simple stuff.

Are there any progressive jackpot prizes?

As mentioned, there are progressive jackpot prizes to be won in this game. The Mini, Maxi and Power Jackpot prizes are typically worth £50, £500, and £25,000, or thereabouts, respectively. Naturally, these sums grow the longer the prizes go unwon. All progressive prizes are triggered at random.