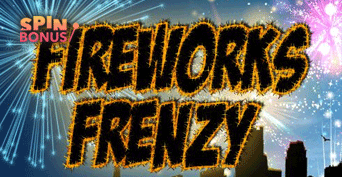 Fireworks Frenzy is arguably a New Year’s Eve-themed slot, and it has been available since 2015. This Eyecon released game is arguably one of the more generic titles out there you will come across, once you strip away its original theme. Players will note right away that this slot has a slightly below average return to player (RTP) rate of just 94.9%.

What Is The Wagering & Prizes?

Aside from that, this 5-reel, 25-line video slot can pay out a reasonably decent 3,000-coin non-progressive prize to its players. To land it, they are going to have to bag 5 of the firework symbols on a line. Doing with so with wilds ramps that prize up to 9,000 coins, though. Wagers are about as cheap as you like in Fireworks Frenzy, stemming from 25p a game up to £2 a game in total.

Fireworks Frenzy does have special features, but they are bog-standard. The Catherine Wheel (a spinning firework if you aren’t aware of what they are) appears as a wild. Wilds will triple the value of any combinations in which they appear (as mentioned with the jackpot prize a moment ago), but they can also replace all other symbols barring scatters.

Those scatter symbols appear as Chinese firecrackers and can trigger free spins should 3 or more of those choose to turn up on the reels during a base game spin. These scatter symbols can also dish out wins worth 2, 5, 15 or 300 coins when 2, 3, 4 or 5 such firecracker icons appear anywhere on the screen.

As with most Eyecon games, there is a gamble feature. A player is entitled to use it following any win. In the round, players can try to double their money with a 50/50 game of chance. It isn’t really recommended to do this with big wins, though. The risk is just too high.

Can I Get Free Spins on Fireworks Frenzy?

Yes, the scatters mentioned above can deliver 15, 20 or 25 free spins to the player, should 3, 4 or 5 pop up on the reels. As before, wild symbols will also triple the value of any winning combinations in which they appear. However, during this round, wild symbols can also expand to cover the entirety of any reels upon which they appear. This makes bagging a win in this low-risk slot a touch easier during this casino bonus feature than it is during the base game.

Should I Play Fireworks Frenzy?

As stated, once the gloss of the unique theme is removed from this game, Fireworks Frenzy becomes a somewhat average release. Don’t misunderstand, though; there are still decent prizes to be had, bets are cheap, and the features are satisfactory. Eyecon just doesn’t do much to wow players with this release, though. If playing New Year’s Eve-themed slots is your forte, Fireworks Frenzy could be the way to go. If you fancy a wealth of features (and original ones at that), there are better titles you can play.