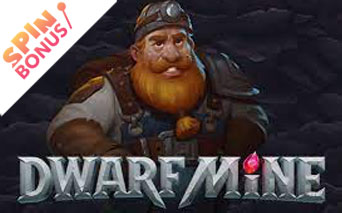 Yggdrasil Gaming is no stranger to developing eye-catching 3D slot machine games. Their Vikings series has proven to be an immense success, and the Dwarf Mine slot is very similar to those games, both graphically and thematically. Dwarf Mine offers up over a thousand paylines, collection-based bonuses and ample opportunities for players to score decent wins with expanding reels and free spin bonuses. Players seeking a dwarf-themed slot that is jam-packed with options and possible ways to win won’t need to look beyond this Yggdrasil slot.

Dwarf Mine features 5 reels and 1,024 paylines, and naturally, none of those are going to be adjustable. Players do, however, have the option of betting anything from 10p a game up to £125 a game. This clearly shows that the Yggdrasil slot is offering good value for money. Moreover, the slot has a non-progressive jackpot which is worth 100x a total stake, and a predictable return to player rate of 96.8%, so decent wins are never very far away in this release.

Bonus symbols appear as drill icons, and these can appear on the first, third and fifth reels. Whenever a drill bonus symbol lands on the reels, the reels can expand downwards by a single row. Bagging all three on the reels will expand all the reels down seven rows and also trigger a free spin bonus round. Unfortunately, the free spins that players start the bonus round with are all they are going to get in this game. No further free games can be won by players.

It is worth noting that during the free spin bonus (once the reels have expanded by at least two extra rows) players can start collecting crystal symbols. These can only appear in the expanded rows in the game. By acquiring red, blue, yellow and green crystals, players can fill up the meters associated with those stones. Once one of the coloured gemstone meters is filled, a set of five free spins are offered, with all high paying symbols transforming into the particular coloured gemstone you trigger the bonus with.

The collectable crystal feature, expanding reels and free spin bonus round should suffice when it comes to special features. Of course, the inclusion of a wild symbol wouldn’t have hurt but wins come around frequently enough all the same. Dwarf Mine may not have the animated bonus rounds that the Vikings Go berzerk series of games do, but there are other similarities between the slots. Any online casino player who happens to be a fan of those Norse slots may just find a reason to give this dwarf mining-themed fantasy slot a run for its money, too.