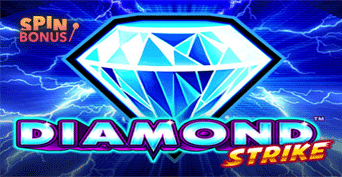 Diamond Strike slot has been produced by Pragmatic Play and is a medium volatility slot release. The slot has been developed to resemble the classic slots of old, albeit with a few video slot features worked into its design. The graphics which appear on the reels of this release are basic at best, and all are reminiscent of the kinds of legendary imagery you used to see in slots.

What are The Wagering & Prizes?

Like most Pragmatic Play online slots, Diamond Strike slot is affordable. In the bottom right-hand corner of the screen, players can access the betting options that the game carries. All 15 pay lines in this 5-reel slot are fixed, but coin values and the number of coins you stake per line are adjustable. At its cheapest, Diamond Strike costs at least 15p a game. However, if you wish to raise your bets, stakes up to £75 a spin can be accommodated in this release. Pay line prizes are capped at 1,500 coins, but there are four fixed jackpot prizes that can be worth substantially more.

The diamond doubles as both the best-paying icon in Diamond Strike and a substitute symbol. This wild can replace any other icons barring golden sevens and free spin icons. At most 1,500 coins can be won with this symbol.

The golden seven offers the same payout as the standard seven symbol. However, if 3 are hit anywhere on the screen, a Jackpot Bonus begins. This happens to make the golden sevens scatter icons, rather than standard paying symbols.

Free spin symbols will naturally trigger a free game bonus round when they appear on the first, third and fifth reels. These symbols can dish out a total of 8 free games but offer no scattered cash prizes.

Are there Any Free Spins & Bonus Features?

Yes, Diamond Strike’s Jackpot Bonus begins with a screen of 12 shining diamonds. Players can click on each diamond, in turn, to try and match three of the same colour, just like in a scratch card. Matching 3 of the blue, green, red or pink diamonds will see players win Mini, Minor, Major or Mega Jackpot prizes worth 10x, 30x, 100x and 1,000x their stake, respectively.

Once the free spins feature begins, players will have a total of 8 free games to play through. During the bonus, scatters appearing on the first, third and fifth reels will retrigger the feature, meaning another 8 spins are handed out. There is no limit on the number of times a player can re-trigger this bonus. It is worth noting that extra diamonds are also added to the reels during this round.

Even though Diamond Strike slot looks like a remarkably simple slot machine game, there is plenty for players to get to grips with here. The non-progressive jackpot prizes are surprisingly decent given the low betting range. The slot is a bit of a medium-variance release, though, so players shouldn’t expect wins to pop up left, right and centre when spinning the reels of this Pragmatic Play developed slot.