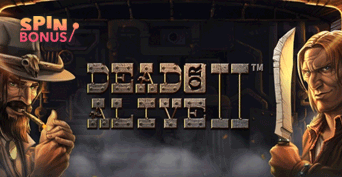 Dead or Alive 2  slot launched over a decade after its predecessor made its debut – is the iconic sequel to Net Entertainment’s Wild West-themed Dead or Alive slot. Aside from having crisper graphics, which any player would naturally expect with a sequel launching so many years after the original, Dead or Alive 2 also has improved features. Some of the bonuses from the first game also make a welcome return in this NetEnt game, as the Scandinavian casino software providers show the world how a slot sequel should be made.

What Are The Stake & Paylines

The Dead or Alive sequel follows the same payline structure as the first game in this series. There are once again just 9 paylines present on this slot’s 5 reels. Players are still faced with dirt cheap bets, with stakes ranging from a floor of just 9p a pop, up to no more than £9 a spin.

Cheap stakes don’t necessarily equate to crummy prizes, though. The Wild West slot is packing a non-progressive jackpot that is worth around 100,000x your bet, which is not to be sniffed at. To win that non-progressive haul, players need to fare well in the High Noon Saloon free spin bonus.

What Are the Symbols & Special Features

Players will note that there are five wild symbols present in this slot. Each one of them is showcased as a different outlaw. They include Apache the Kid, Della Rose, Jesse James, Belle Starr and Billy the Kid, and appear on the first, second, third, fourth and fifth reels of the Dead or Alive II slot, respectively. Wild symbols can act in the stead of any other icons save for scatters.

Those scatters appear as skulls with guns. Landing three of those on the reels will trigger 12 free spins, with a choice of three distinct bonus rounds. Bear in mind that each free spin bonus has its own levels of volatility, so make your decision carefully.

Can I Get Dead or Alive Free Spins & Bonuses?

Yes, The first of three bonuses players might choose is the Train Heist bonus. It is the free spin feature with the lowest volatility level. In the round, every wild which appears boosts a multiplier and adds a free spin to the player’s tally.

By contrast, the Old Saloon free spins bonus is a flashback to the original Dead or Alive game. In this round, players will snap up 2x multipliers which can double any wins they land. Any winning icons which appear will become sticky symbols and remain in place for the duration of the feature. Additional free spins can be won if all 5 wilds appear on the reels at once.

The final of the Dead or Alive II’s bonuses is the most volatile – it is also the best-paying. The High Noon Saloon free spin round uses the same Max engine you can find in Berryburst Max and other slots from this provider. There are sticky wilds with 2x and 3x multiplier presents, and they can multiply together to boost the amount you can win. Landing all five outlaws on the reels will once again add a further 5 free spins to the feature.

Jam-packed with more features than its predecessor, with better graphics and cheap stakes, there is very little about the Dead or Alive II slot that players won’t find appealing.