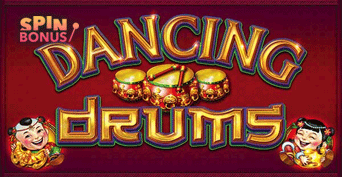 Microgaming/Shuffle Master’s Dancing Drums is ideally designed for mobile slot players. A good portion of the screen in this Chinese-themed release is wasted with glowing embers, with the main reel set located away at the bottom of the screen. The top contains four reasonable progressive jackpot prizes.

Dancing Drums slot may be cumbersome to play in that regard, but there are other elements that make the slot more enjoyable. The design of this game is quite similar to the Twinstar J43 land-based slot developed by this provider, so anybody who has popped along to the casinos of Vegas and beyond before will know well enough what to expect.

What Are The Stake & Pay Lines?

There are 243 ways to win line structure in place initially, although that can rise to 7,776 paylines at specific parts of the gameplay. The number eighty-eight is synonymous with Chinese luck, and that happens to be the minimum wager in this release. Maximum bets can rise as high as £220 a spin on Dancing Drums.

One of the perks of the 243 ways to win payline structure is that it doesn’t necessarily require players to land symbols on a payline to win. Instead, merely landing identical symbols on adjacent reels is often enough to see a cash prize paid out.

What Are The Wild & Scatters Symbols?

Wild symbols and scatters both appear in dancing drums slot. Chinese characters (in a frame) appear as substitute symbols, and they can replace all others in the slot, save for bonus icons. They do only show up on the second, third and fourth reels, though. Wilds could randomly trigger a jackpot bonus round.

Is There A Jackpot Bonus Round?

In the jackpot bonus round, players can select from a series of twelve coins. If they land three matching ones with their picks, players will land whatever progressive jackpot cash prize they correlate to. These include Mini, Minor, Major and Grand jackpot wins.

Scatter symbols appear as the titular drums in this release. They can deliver scattered cash prizes worth up to 44x your stake when they appear on the reels. Players who land three or more from the leftmost reel will trigger a free spin bonus round in this slot.

Can I Get Free Spins on Dancing Drums Slot?

Yes, Once the free spin feature in Dancing Drums has been activated, players will be able to play a varying number of spins on different grid sizes. Options include 50 free spins on a 3×5 reel set, 10 turns on a 4×5 set, 5 spins on a 5×5 grid, or just three free games on a 6×5 reel set. Alternatively, you might choose to play with one of the randomly selected casino bonuses. In this bonus round, it is possible for players to see expanding paylines which could see as many as 7,776 paylines present, as mentioned earlier.

Dancing Drums slot is a bit of a hit and miss game. Players who want to experience a realistic, Vegas-style slot in their favourite online casinos will likely be impressed with what this game has to offer. However, there are other slots out there with similar themes and more to offer.