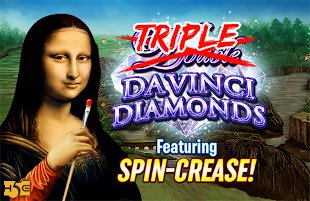 Triple Double Da Vinci Diamonds includes a Spincrease bonus. As you play the game, a Spincrease meter fills up and the meter will transform single portrait icons into two symbols. If you opt to place more significant stakes, the meter will transform single icons into triple ones. Naturally, this accounts for the increased RTP percentage. At the same time, it can lead to five-of-a-kind pay-line combos becoming fifteen-of-a-kind winning combinations.

The Tumbling Reels feature also appears in this release. In short, whenever a win occurs, the winning icons are removed from the reels and new ones will pop down to take their place on the screen. The more wins in succession you land, the further this respin-style bonus will continue.

A free spin bonus round is also included. Scatter symbols are required to trigger this feature and you need to land them on the first, third and fifth reels at once. A total of 10 free spins will be delivered if you manage to achieve this.

No additional special features are worked into the design of this bonus round, however, additional free spins can be won when further scatters land on the reels. Moreover, the Tumbling Reels and Spincrease features found in the base game will also appear in the free spin round.

Why You Should Play Triple Double Da Vinci Diamonds Slot