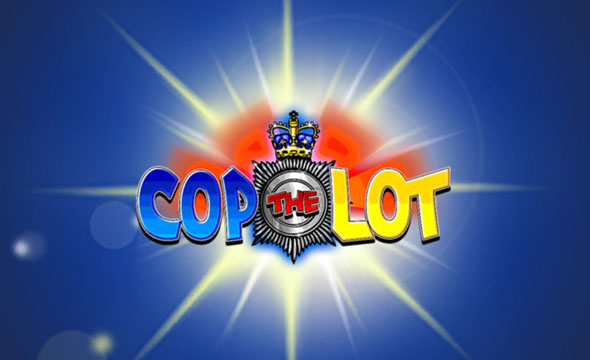 Cop the Lot slot is Blueprint Gaming’s take on the classic Cops and Robbers theme. This slot game has been developed to resemble classic pub fruit machines of old, in terms of theme. However, its gameplay is very much that of a modern video slot. It even comes equipped with access to the developer’s Jackpot King progressive jackpot network.

Cop the Lot features the customary 5-reel and 20-line gaming structure, and stakes in this game range from 20p up to £200 a game. Even without the progressive prizes, you can win up to 500x your bet via the game’s click and win bonus.

The game’s progressive jackpot requires you to trigger the Jackpot King bonus by landing 5 Jackpot King icons on the reels during gameplay.

You should keep your eyes peeled for the dynamite sticks, as these happen to be wilds and can dish out wins worth up to 500x a bet. Wilds can also double the value of any winning combinations in which they appear.

The Usual Suspect bonus is the first feature you might come across. It requires three scatters to appear anywhere on the screen. This triggers the ‘click and win’ round mentioned earlier, where you could win up to 500x a stake.

The second bonus in this online slot is triggering by landing three or more cop hats. These symbols trigger a trail bonus where you can roll dice to collect keys and multipliers. Once the cops catch up with you, the round ends.

Collect three keys to enter the Millionaire’s Row round. This round has a lot of similarities with features in pub fruit machines. you are looking at collecting up to 500x your bet in another click and win feature until the Banged-Up icon appears, or until you cash out your winnings with the “Do a Runner” option.

Cop the Lot also has a Smash ‘N’ Grab bonus, and this requires three safe icons to appear on the three innermost reels. In the round, you can select a safe to reveal several free spins. you can gamble them, but it is best not to. In the free spin round, additional wilds could appear on the reels, making winning a touch easier.

Being a Jackpot King network game, you can trigger the jackpot round with five Jackpot King icons. After that, you need to acquire 15 crowns to trigger a wheel of fortune, where you might win a significant progressive prize.

Why You Should Play Cop The Lot Slot

This Blueprint Gaming release offers up an entertaining theme, an abundance of varying features, plus an enticing progressive jackpot from the Jackpot King network.