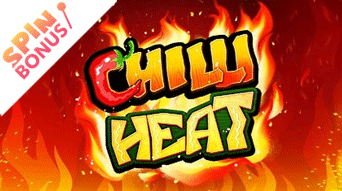 Chilli Heat slot is a Pragmatic Play developed game that masquerades as a progressive jackpot slot, but one which features fixed non-progressive jackpot prizes. The theme of this game is predictable and generic. Many online slots focus on chillies when trying to push a Mexican theme to players via their slots, and this one is no different, coming complete with a chihuahua, tabasco, mariachi and other stereotypical Latin American imagery.

The Pragmatic Play slot features 25 paylines, but they are fixed into place. Players can choose to alter their bets, though, with stakes ranging from 25p a game up to £125 a spin. The RTP rate (96.52%) in this slot makes Chilli Heat sound like a great paying release, but players are limited to a top prize worth £1,000.

Players will want to keep their eyes peeled for the Chilli Heat slot’s logo. This is a wild symbol and can substitute for all standard paying icons in the game. It does not offer cash prizes, though. Scatters appear as moustached sun faces, and these icons can only show up on the second, third and fourth reels. Pocketing such symbols on all three of the central reels at the same time will trigger a free spin bonus. Bags of cash also appear as bonus icons. Landing six or more of them anywhere on the screen trigger’s a Money Re-spin feature, and it is with this feature that players can hope to land one of the fixed jackpot prizes mentioned above.

The Money Re-spin bonus will see players get to spin the reels for free, with just money bags appearing on the reels. Additional money bags offer further spins. Players will win a jackpot prize based on how many money bags they have accumulated at the end of the feature, which is terminated when no new money bags appear, and they run out of spins. At most, players could expect to win £1,000 with the Grande Jackpot. The other jackpots are worth considerably less, at the £100 and £10 marks.

Once the Chilli Heat free spins feature has been activated, players will get to play with a total of 8 free spins. During those spins, the low-paying icons are removed from the reels. This allows players to have a decent crack at landing top cash prizes. Players can also pocket additional free spins if they land more scatter symbols on the reels while the bonuses are being played.

How to Play Chilli Heat Slot

Symbols to Look Out For

The highest paying symbols on the normal reels of Chilli Heat are:

The Lower paying symbols are playing card symbols from Ace to Jack.

The Chilli Heat symbol is your wild symbol, which substitutes all symbols except for the scatter and money bag symbol. The scatter is the blazing sun; appearing on the 2nd, 3rd and 4th reels only, and a hit of 3 of them will trigger eight free spins.

Finally, there are Money Bag symbols that are present on each of the reels. Landing at least 6 of these triggers the main feature: Money Respins.

The Money Respins feature can also be triggered throughout the free spins round. You must land six or more Money Bag symbols to trigger Money Respins. The normal reels are replaced with special reels and any normal symbols will promptly fade away leaving only money symbols and empty spaces. You will begin with 3 respins, and any Money Bag symbols that land will reset the number of respins to 3. This cycle continues until all the respins are completed or every reel position on the screen is occupied with money symbols. The value of each symbol is added together and the game pays the total amount.  If all 15 positions are filled, you will also win the Mega Jackpot.

Land 3 or more scatter Sun symbols and trigger eight free spins. An extra eight free spins will be awarded if you land another 3 Sun Symbols during the feature! During the free spins bonus rounds only the high-value symbols, the wild, money bag and sun scatter symbols feature on the reels.

With a title like Chilli Heat, there’s only one thing for it: let’s get our bags packed, our sombreros firmly donned and head off to the land of Mexico for this sizzling online casino slot game provided by Pragmatic Play. Chilli Heat slot has gone on to be something of a success at UK casino sites. It is strange that this is the case, though. Apart from its quirky theme and cheap bets, there really isn’t that much to shout about with this release. Chilli Heat is a decidedly average game. The features it carries are basic at best and can certainly be found in plenty of other top slots online. Any player hoping to try their hand at this release will find it at any casino which houses titles from this provider.