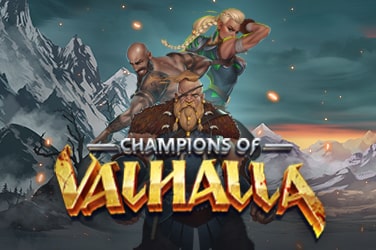 Standard wild symbols appear as purple blocks, and these can replace all barring scatters in Champions of Valhalla. Those scatters appear as Odin, and these shield symbols can trigger 9 free spins when they appear on the second, as well as third and fourth reels simultaneously.

What is The Block Of Wilds Feature?

When rune symbols appear on the third reel, a Block of Wilds feature begins. This will convert fill blocks of wilds (including wilds, shields and runes) into feature wilds (extensive wilds) which cover several spots on the reels.

There are specific places where these wild blocks can occur, which makes the game a touch complicated. However, a full chart of all Block of Wilds paying positions can be found on the mobile slot’s paytable. Alternatively, you can simply spin the reels and play, because any winning combos which do occur will be highlighted.

How Does The Free Spins Bonus Feature Work?

Once the free spin round begins you will start with 9 free games. Every additional Odin shield scatter will offer up to 3 additional games in the bonus round.

The Block of Wilds is active during this feature, which can be retriggered a maximum of 50 times. Aside from those features mentioned already in this bonus round.

Why You Should Play Champions Of Valhalla Slot

There are plenty of thrilling extra features to keep you highly entertained in this popular Eyecon slot release.