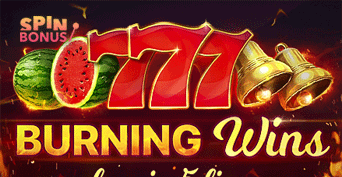 How To Play Burning Wins Slot

Burning Wins is one of the simpler types of slots players will find in Playson’s library. The casino game is notable for being a classic slot, although one which features 5 paylines. Upon its reels sit a plethora of fruit and one-armed bandit imagery and icons, and understandably, no special features make an appearance in this decidedly elementary release.

Players shouldn’t expect too much from Burning Wins, either in terms of gameplay or wagers. There are 5 paylines spanning the slot’s 3 reels, as mentioned above.

Moreover, each reel contains just 3 symbols, so landing wins on this slot is going to be challenging to say the least. Burning Wins has a fundamental set of wagering buttons. Players can use the directional buttons to bet anything from a floor of 10p per spin up to a ceiling of £100 a game. Few players are going to stake that kind of money on this release, and there won’t be too many happy with the 10p minimum stake, either.

There are none. The slot doesn’t even have wild symbols or scatters to offer players. Instead, fruit and classic slot imagery fill its reels.

The lowest paying icons in this game are the cherry, orange, lemon, and plum symbols. These can deliver wins worth up to 7x a bet when 3 appear on a line. The grapes and watermelons are worth substantially more, at 15x a bet.

Bars and bells are far more prosperous, and these can deliver wins worth 20x and 40x a total stake when 3 of these appear on the reels. As for the best-paying symbols in the game, they are sevens. Landing three of these 7s on a line will dish out the non-progressive jackpot which is worth 60x a bet. When playing with the maximum wager, this happens to be worth £6,000.

Do I Get Free Spins on Burning Wins Slot?

No, Unfortunately. if there aren’t any special symbols in the game, there aren’t likely to be any bonus rounds either. Not even randomly triggered bonuses make an appearance in Playson’s Burning Wins slot. Players are going to have to make do without free spins or instant win features. While it is commonplace for classic slots to avoid offering these features, even the most basic one-armed bandits and fruit machines from rival developers tend to at least have wilds. This game does not.

The lack of features won’t bother players as much as the mediocre wagering range. It is costly and offers next to nothing in exchange for its high stakes. As a result, it is fair to say that Playson’s Burning Wins slot is certainly far from being a crowd pleaser. There are indeed better classic slot-style casino games out there on the net for you to play.