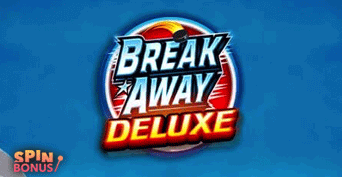 Any slot player who has tried their hand at ice hockey-themed slots will know all about Microgaming’s Break Away. It has become the number one slot in this genre, and the benchmark for all other ice hockey slots to aspire to, even surpass. Thus far, none have managed to do so. One slot which may be able to give the original game a run for its money, or even trump it is Break Away Deluxe.

Of course, this slot has also been developed by Microgaming. The video slot is essentially a polished version of the original release, although with a few new twists and turns worked into its design. The game is played over a 5×5 grid of symbols. Players can opt to play with 18, 38, 68 or 88 paylines, with wagers ranging from 18p a spin up to £44 a game, depending on how many paylines a player choose to play with. Prizes are worth around 500x a stake in this slot, so there is value for money to be had.

As is often the case with Microgaming produced video slots, the wild symbol in the game shows up as the slot’s title logo. This icon can only appear on the third, fourth and fifth reels in the base game. The symbols will naturally replace all barring scatter symbols. It is worth noting that these wilds are “Growing Wilds”, a new feature for the release. These can see the initially stacked symbols become super-stacked, growing by one symbol on each spin in the game.

Microgaming’s traditional Rolling Reels gaming engine comes into play in Break Away Deluxe, too. Whenever a win is acquired, the symbols which starred in it are removed from the reels. A flurry of new symbols can take their place and could lead to players bagging several wins on the spin without a new stake needing to be wagered.

Also included is a Smashing Wild bonus. This can be triggered at random. It will see the second, third or fourth reels turn entirely wild. The feature can only occur during the Rolling Reels bonus, and if it does happen, it will remain in play until the Rolling Reels feature ends.

How Do I Get Break Away Deluxe Free Spins?

Players who land 3 to 5 scatter symbols (puck icons) on the reels will win a total of 12 free spins. During this round, multipliers come into play. They increase with each win that is chained together using the Rolling Reels feature. Players can snap up multipliers worth 2x, 3x, 4x, 5x or 8x when they land 1, 2, 3, 4 or dare we say 5 wins in succession. At the same time, wild symbols can appear on the second reel as well as the others during this bonus round.

If you enjoyed the original Break Away slot, then there is every reason to enjoy this release. It offers substantially more than its predecessor in terms of features. If you haven’t tried either game yet, this deluxe edition is highly recommended over the first game.